If you’re the kind of person who chooses bars based on the beers on tap, then Taplister may be the app for you.

From a consumer perspective, the Taplister website and iOS app allow you to browse nearby bars to see what beers are available, or to search for a certain beer and see which bars are serving it. Businesses can claim their profiles, but even if they don’t, they’re still in the system with data that’s crowdsourced from Taplister users.

And for bars and breweries, Taplister should provide a relatively easy way to update their menu via Web browser, telling customers about exactly what they have in stock. (That can be particularly important if you’re a small brewery without much of a marketing budget.) That information will be available in Taplister, but it can also be shared on Facebook and Twitter, and even through something that the company is calling a Digital Beer Board — a digital menu meant to be displayed in the store on an HDTV or 1080 pixel display.

Founder and CEO Kerry Finsand says he’s actually been working on a version of the service since 2009, but now he’s at Taplister full-time, and he’s ready to turn it from a side project into a real company. As part of the “launch,” he’s announcing redesigned versions of the website and iPhone app, as well as integration with RateBeer (which can provide more information about the beers) and Foursquare. 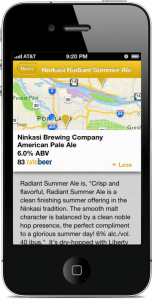 But is there really a big market for this? (Other beer apps include “Foursquare for beer” Untappd.) Especially if the app is focused on craft beers? Well, Finsand points to Brewers Association data showing that, for the first time, craft beer surpassed 5 percent of the national volume of beer sold, while the volume of the total beer market declined by 1.32 percent — so he argues that the industry is on the rise.

Finsand also says that you don’t have to be a hardcore beer expert to be interested in good beer. He points to his own evolution as a beer drinker, which led him from PBR to Blue Moon to things like Deschutes and Widmer, and now into barley. Perhaps Taplister can be a tool to help people get more familiar and comfortable with craft beer.

And he says there’s definitely user interest. Initially, Finsand only wanted to introduce Taplister into a city after a certain number of bars had signed up, but then he started to get more demands from users to open in their location, and now it’s available in more than 50 cities.

Taplister is free for consumers, and pricing starts at $99 a month for businesses.