As expected, Samsung has filed a lawsuit against Apple’s latest iPhone — the iPhone 5 — alleging the smartphone infringes patents it holds.  Commenting on the action in a statement given to Reuters, Samsung said: “We have little choice but to take the steps necessary to protect our innovations and intellectual property rights.”

We’ve contacted Samsung for further comment and details of the disputed patents . Samsung provided the following full statement: “We have always preferred to compete in the marketplace with our innovative products, rather than in a courtroom. However, Apple continues to take aggressive legal action that will restrict market competition. Under these circumstances, we have little recourse but to take the steps necessary to protect our innovations and intellectual property rights.”

At the time of writing Apple had not responded to a request for comment.

According to Florian Mueller of the FOSS patents blog, the lawsuit was filed about an hour before the Northern District Court of California’s Judge Lucy Koh’s dissolved a preliminary injunction banning sales of Samsung’s Galaxy Tab 10.1 tablet in the U.S. — an overhang from another big bout of patent litigation between the two companies in which Apple won damages of more than $1 billion.

“Samsung formally filed a request with the court in a parallel Apple v. Samsung two-way litigation (which started in February 2012) to add the iPhone 5 to the list of products accused of infringing eight Samsung patents,” Mueller notes. 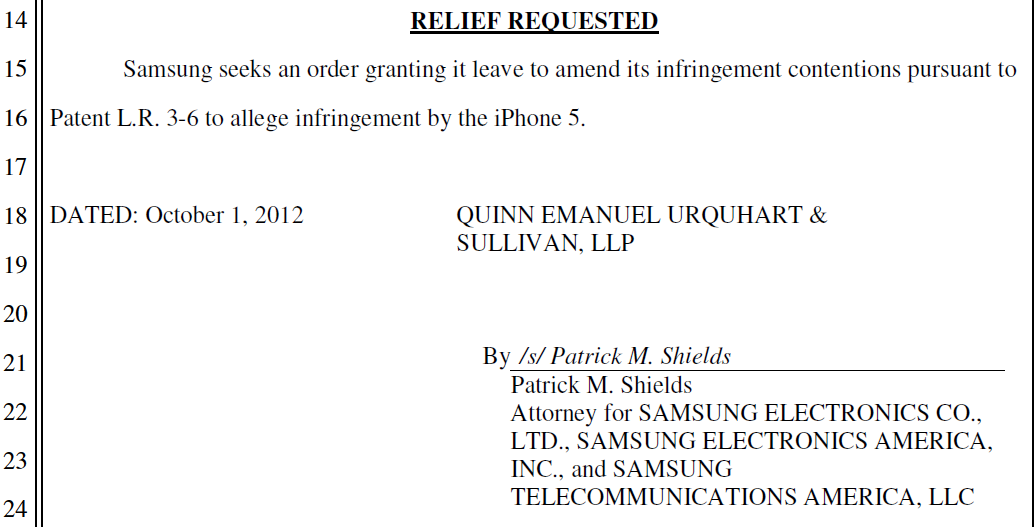 The eight patents in question are the same patents Samsung asserted against Apple’s iPhone back in April. FOSS Patents has the full list.

One technology in the iPhone 5 that could become a nexus for patent dispute is 4G LTE — which Apple has previously only included in the iPad. Apple’s competitors, including Samsung, have previously warned Apple they will sue if it adds LTE to the iPhone and seek a U.S. sales ban.

Update: Samsung has provided the following statement to confirm this lawsuit does not include any LTE patent infringement allegations. “There are no 4G LTE patents involved in this lawsuit at the NDCA,” the company told TechCrunch.