comScore today released its latest U.S. mobile market rankings, covering usage by 30,000 consumers over a three-month period ending August 2012 — that is, in the period just before the launch of Apple’s newest iPhone, and during the time when Samsung was slapped with a $1 billion+ fine over a patent suit brought against it by Apple. In that time, Samsung retained its position as the country’s most popular handset maker, covering both smartphones and feature devices, but its share actually remained flat, at 25.7% of all users, while Apple’s share grew the most and other top players declined. Google’s Android OS, meanwhile, solidified its position as the most dominant smartphone platform, now being used on nearly 53% of all smartphones.

Among all mobile handset makers (covering both smartphones and feature devices) Apple stood out in the period for growing the most, with a rise of 2.1% to take a 17.1% share of all mobile users. That narrowed that gap between it and number-two LG, which declined by 0.9% to 18.2%.  Motorola, equally, saw a decline of nearly 0.8% to bring it down to 11.2%. That’s largely in line with how both of these performed in the quarter before. HTC, however, appears to be seeing a mini-turnaround. It’s market share increased by 0.2 percentage points, and is now at 6.3%. As with the previous survey, it’s telling that the top-five are dominated by Android and Apple.

As for Samsung’s flatlining, it may be that this is more about how it’s doing in its feature phone business rather than its smartphone business. Figures out today from Localytics show that in fact July and August were pretty strong months for sales of Samsung smartphones — in particular its new flagship Galaxy S3. (September looks to be a different story.) Indeed, growing sales in smartphones coupled with slowing sales in feature phones is a trend we’ve seen in previous quarters, too. 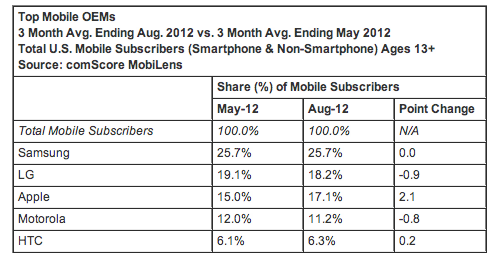 Among smartphone platforms, Google is once again gaining some ground and is now well into accounting for more than half of all smartphone users in the U.S. However, as in the previous quarter Apple is still growing at a faster rate, with Google now at 52.6% of all smartphones, growing by 1.7 percentage points; and Apple at 34.3%, growing by 2.4 percentage points. And it’s all about consolidation: RIM, Microsoft and Symbian, which all have less than 10% market share, all continued to decline. 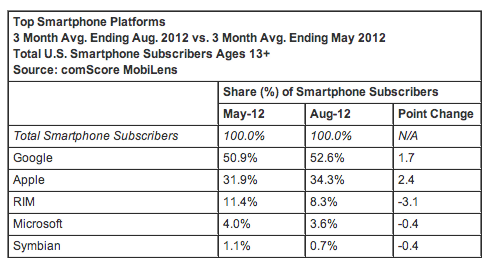 That’s in contrast to the international picture as painted by Kantar Worldpanel ComTech. The WPP-owned analysts chart smartphone purchases, and there it is noticing some gains being made by Windows Phone, particularly in Europe.

comScore also charts what people are using devices for, and while it looked like text messaging continues to be the most popular activity, with 75.6% of all users sending texts. The quarter before texting growth was flat; this time around it’s picked up a little steam once again, up by 0.8 percentage points. But it’s not growing as fast as app usage or using the mobile web, these both grew by more than 2 percentage points, with app downloading done by 53.4% of all users, and mobile web being used by 52%. Social networking, games and music rounded out the top 5.

What’s perhaps most notable about this list is that it covers both smartphone and feature phone owners. In other words, “advanced” services beyond basic voice and text are becoming mainstream and easy enough to access even on low-end devices that we are seeing an overall growth in a critical mass using them. 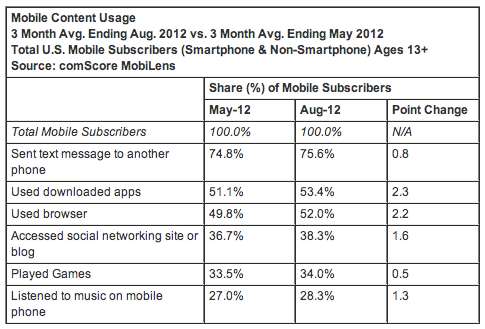