There’s a new mobile app called Go-Matic that you can use to form instant groups with the people around you, giving you an easy way to make connections with people you’ve just met and to coordinate among large groups.

The app comes from Go Factory, a startup launching this week at the DEMO conference, and it’s built on top of the company’s platform, Go Machine (you can probably sense a theme in the names here). To get started, you and whoever wants to join just opens the app and hits the big red button, then you’re all put in a group together where you can post comments, location data, photos, and other content.

For example, CEO Jeff Weitzman says he used the app to coordinate a company dinner — turned out that the original destination was closed, but Go-Matic made it easy to suggest a new location and to track everyone’s locations as they headed to the other restaurant. Or, to choose an example from my own life, I ended up meeting some friends at a bar tonight, and they also brought some of their friends, and we all wanted to go out to dinner afterwards. In order to coordinate everyone, there was a lot of running around and shouting, as well as text messaging — although none of us knew everyone else’s number. If everyone had downloaded Go-Matic, it would have been much easier to coordinate, and we would also have been able to share photos and comments to document the experience.

The app uses a combination of geo-location and audio fingerprinting to determine who belongs in which group. The audio fingerprinting is important because it adds another filter to the process, so that someone who’s forming a group in a coffee shop doesn’t get stuck with someone trying to form a different group outside. That may not be a big issue with a just-launched app, but hey, it’s good to think ahead. And I suspect that it will be useful in crowded situations where multiple people might be using the app — like, say the DEMO conference. 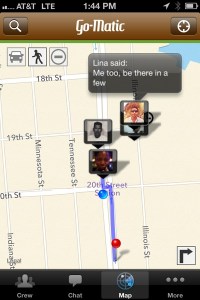 And if you have trepidation about joining a group with people who you just met, well, you don’t have to share any personally identifiable information — you’re identified by whatever name you choose.

Go Factory co-founder and CEO Jeff Weitzman says the emergence of apps like Pair and Path shows that there’s a need for “micro social networking,” but he argues that they don’t “provide a novel solution.” He says that Go-Matic, on the other hand, is built “from the ground up” to address “true, real-world” situations.

Now, I’m not ready to write off those other apps, but Go-Matic’s group creation process, in particular, just feels really cool — not just fast and simple, but also genuinely fun. And I like the fact that Go-Matic is built to facilitate and coordinate real-world experiences, rather than being just another place where you can dump social content. That could mean people are more likely to continue using it, rather than downloading it and letting it sit idle because they’re not sure what to do.

Weitzman says the app is really a showcase for the Go Machine platform, which he wants to sell to other companies, whether they’re brands trying to create a more direct relationship with consumers, or businesses that want to increase collaboration among the workforce.