We last heard about AirCover — an app developed by Founders Den co-founder Jason Johnson’s own startup BlueSprig — when it launched as an all-in-one protection assistant, letting people secure their devices from viruses, back up files, locate a lost iPhone or Android handset, track family members, and more. Fast forward to today, and Blue Sprig is launching the first offshoot of that flagship product, AirCover Family Locator, which takes the people-tracking element and extends it into a standalone app.

But while you often hear of spinoffs coming out of the success of the original app, it seems that the opposite is the case here. In the last several months, AirCover only had downloads in the tens of thousands, “not hundreds of thousands or millions,” admits Johnson. His verdict: it turns out that people don’t really want apps with lots of different features. They may like all that screen icon clutter, but when it comes to utility, simplicity is the order of the day.

“It’s been difficult to convey to consumers what each of AirCover’s tools does,” says Johnson. “From my perspective we stumbled. It was as if Microsoft Office was launched as what it is today. That’s a lot for people to swallow.

“We knew we were in trouble when I did my interview with Robert Scoble and it took me 20 minutes to show all the features. It’s just too much.”

The original AirCover hasn’t been a washout, though. It’s been a hit with carriers who may not want to preload lots of apps on to people’s phones but want to offer them all of this functionality. Blue Sprig is planning to roll out the original AirCover with Softbank in Japan and is currently testing with a couple of other operators. Carriers’ distribution and promotion muscle could see the original app suddenly get a new infusion of life.

But so far, the direct-to-consumer sell has proven more of a challenge. So, using app analytics (from Flurry, as it happens), Blue Sprig deduced that the family finder part of AirCover was proving to be one of the most popular features — not just in terms of time spent on it, but the amount of people using it, so they decided to run with this as the first spinoff from AirCover.

The new app — on iOS and Android and priced at $2.99 (but currently free app for a limited time) — is all about tracking and information gathering. It lets users geo-fence different areas, and when a corresponding family member enters those spaces, the user gets an alert without the other user having to actively “check in” and “check out.” The app also lets users monitor other users’ distance from each other and exact location. Other features include quick links to emergency response tools and gives users the option of looking at a “footprint” of where a user has been over the last couple of days. (So, in other words, even though it’s “pared down,” there still seems to be a lot going on, all in the name of Family.)

“It’s less about where people are and more about when they are coming and leaving a place,” Johnson says. It can perhaps most obviously be used to track your children, but equally can be useful if, say, your partner is passing by the store on the way home from work and you want to get in touch to request him or her to buy some milk for the morning.

As a standalone service, Family Cover, as with the original version, still requires each user to have a smartphone — which may make 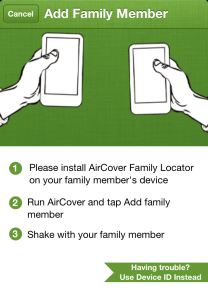 it impractical for tracking younger children — although there is (still) a plan to work with a hardware maker to devise a product that is not necessarily an iPhone or Android device that would be picked up by the tracking tool. “We wanted to get the family-centric version out and get traction before iterating,” says Johnson.

But just because it’s being marketed to families doesn’t mean they are the only ones using it. “People are doing some strange things,” Johnson says, noting that one user is not a family but a plumbing company with four vans, with the business using the app to track where each plumber is to better manage time and jobs.

Still, the GPS/tracking space is pretty overcrowded at the moment (although you can probably say that for every category in app stores today). Some of the leading players in tracking, like Life360, have already seen downloads in the tens of millions.

BlueSprig, however, has a special ace card up its sleeve: it’s getting acquired at the moment by a very big company. (We can’t spill the beans on the details yet, but we will.) That will give it the resources and exposure to bring its apps to a much bigger market, across multiple platforms beyond simply Android and iOS.

It will also give BlueSprig some fuel for how it plans to develop personal utility services in the future. “We are getting more focused on services that provide info based on an individual’s location,” says Johnson. “Kind of like Google Now, except that we’ll work on multiple platforms,” says Johnson. “The idea is to develop apps that help you make decisions based on where family and friends in your network are located.”