Open source fear mongering is still a reality. But in today’s world, it is nuanced with the belief that an open enterprise means open APIs.

They are not the same and should not be confused.

The issue surfaces more now that RESTful APIs have become the chosen way to exchange information through applications. They turn the enterprise metaphor on its head. It’s no longer a fortress surrounded by four walls. Instead, the enterprise walls are porous with data flowing in and out like never before.

The advent of loosely coupled applications for exchanging data is giving proprietary software providers the opportunity to maintain that open APIs have more importance than open source. It’s not a black and white issue. Open APIs do provide a way for companies with proprietary platforms to open up its technologies to a legion of third party partners and developers.  But open source remains critical as the foundation for development with companies that build open platforms, proprietary technologies or a mixture of both. 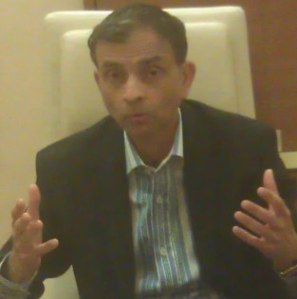 TIBCO CEO Vivek Ranadive is an intellectual, passionate technologist. He also is a businessman who wants to protect the company’s crown jewels — its BUS software. Tibco’s BUS technology makes it possible to do complex data integrations. But I think he goes too far when he attacks open source as he did last week in an interview with me last week at TUCON, the company’s annual event in Las Vegas.

“Open-source is fool’s gold,” Ranadive said. “You think you are getting something for nothing but you are not.”

The interview followed a discussion I had with Sun Co-Founder Scott McNealy earlier in the day. McNealy had said that no big company is watching over open source. Ranadive called that an oxymoron.

In the same conversation, Ranadive said he thinks it is more about open APIs these days then open source.  He said big companies like Tibco do support open source but in total, his company does not compete with open source technology.

It’s without question that open APIs are more important these days but the open source model is thriving, too.  They are not the same but co-exist in a more federated environment.

Talend, Tibco’s main open-source rival, offers data integration technologies with what is known in the market as an open core model. Like a lot of open source companies, Talend contributes code to Apache. The goal is to be aligned with the open-source communities and develop partnerships that help extend the company’s product reach.

Talend does not contribute all of its code to Apache. Its core technology is open source. But that core also serves as a way to differentiate with products that the company and its partners develop.

You see this model play out across the market. Established open-source companies such as Sugar CRM, Jaspersoft and Eucalyptus Systems all use a similar model and it works. It’s not fools gold at all. It’s real gold that spreads wealth throughout the tech ecosystem.

Open APIs do provide ways to use proprietary applications but just as critical is understanding what you are getting yourself into.

Rishidot Research Founder Krishnan Subramanian said to me in an email that with open APIs you may be able to export your data any time but what’s the point if you can’t use it elsewhere?

With open source, I can be back in action with minimal disruption. Open source ensures business continuity even when the vendor goes out of business. It also lowers the barrier to entry and exit.

Subramanian’s sentiment is similar to what McNealy said in our interview. Open-source lowers the barrier to exit. And not enough companies are taking the time to do the analysis on what it means when you decide to move off the proprietary platform and to a new platform.

Jay Lyman makes the point, and I concur, that open source and open APIs deeply correlate. He argues that open APIs are becoming more importsant than open source in some respects but the connections  are clear. Here is what he wrote earlier this year for Linux Insider:

Connections to open source continue to be critical, and it appears open source code has become a standard expectation among customers, many of whom are finding out that openness in APIs is just as important. This is also happening as we see the drivers of open source software shift from cost savings and flexibility innovation, performance and ROI. It turns out that, indeed, openness matters — and the growing significance of and respect for open APIs also serve as further validation of open source software methodology.

Tibco has made its own forrays into open source. In 2007, the company open-sourced PageBus, publish-and-subscribe message bus implemented in JavaScript. The service acts as a key component for Tibbr, the enterprise social networking platform from Tibco. Tibbr is an outstanding service. Its strength shows in its adoption. More than 1 million people now use the service, which launched about two years ago. This past week the company unveiled a partnership with Box, the high profile, heavily funded startup.

With the partnership, Tibco also released an enterprise API and a rich Javascript library so users may view one pane of glass to follow the Tibbr stream and the third-party apps. It’s damn cool stuff.

Tibco says its next step is to build a developer community. This makes sense but being more open source friendly would go a long way at striking a balance so it can appeal to developers everywhere who use open source to create apps and services.