Serial entrepreneur and investor Jason Calacanis appears to be gearing up for the launch of his next venture, which may also signify one more pivot for his information site Mahalo. And that next step also looks like a new chapter for an internet domain that itself has seen a couple of pivots.

On a tip from a reader, we visited inside.com and found this: 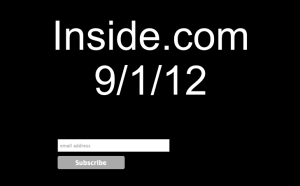 Clicking to subscribe, you get sent to a mailing list creator owned by Calacanis, and an email confirmation referring questions directly to him (or, at least an email address to his name). We have sent an email to that address but have yet to receive a reply.

Putting to one side that we’ve already passed September 1 there seem to be other clues that the company is moving ahead with an Inside.com venture, which seems to be either a rebranding of either all or part of Mahalo. Two recent clues of that:

1) An ad posted by Mahalo is seeking a user experience/user interface graphic designer for Inside.com. In that ad, it describes inside.com as a “knowledge community, focused on creating high-quality videos, apps, iBooks and written courses.”

“We’re well-funded by Sequoia…Newscorp, Mark Cuban, Elon Musk (Paypal) and CBS,” the post reads. If that sounds like Mahalo rebranded to you, the rest of that description, describing what sounds like an existing product, seems to clinch that: “Our library is growing rapidly as we continue to focus our efforts on joining users with expert teaching content.”

2) When Mahalo’s president, Jason Rapp, left the company at the beginning of September, AllThingsD posted a staff memo, which seemed also to give some hints that a name change was on the cards.

“The company has never had a clearer path or brighter future (plus a new name!) and for that reason it’s the perfect time for me to step back and pursue my next adventure,” he wrote, signing off, “Mahalo and see you Inside, Jason.”

Inside.com and Mahalo, in a way, are in something of a similar position, both being ships in the dot-com waters looking for a friendly dock.

Mahalo, founded by Calacanis in 2007 as a “human-powered search engine” as an alternative to Google and the rest. Perhaps because making a dent into Google’s search traffic proved to be actually very hard, it has pivoted several times since. Among them, it’s offered information in a Q&A format (tagline: “we’re here to help”).

Most recently, Mahalo settled into life as a how-to video and learning site, spinning apps and other media out of the concept (new tagline: learn anything). Why is inside.com being introduced as a brand within this? Well, it is strong word, like about.com (with which it competes) and it might snag more random users than the Hawaiian word for “thank you.”

Inside.com, meanwhile, was originally a high-ambition, but ultimately-failed website covering the media industry from the first dot-com boom. The domain was eventually purchased, in 2006, by ex-Inside.com employee Rafat Ali, who had started the media blog paidContent.org — having between Inside and pC worked for Silicon Alley Reporter, started by none other than Calacanis, and eventually sold to Dow Jones. In purchasing the domain, Ali had the intention of putting his different media sites (which also included mocoNews.net) under the Inside brand. That idea appeared to die after the paidContent group got bought by the UK newspaper The Guardian, which apparently wanted to sell the name for upwards of $100,000. For a long while — nearly four years — visits to inside.com redirected to paidContent.org. (Ali left paidContent in 2010 and this year started a new travel-focused site, Skift.)

Interestingly, inside.com is still registered, as of today, to Sedo LLC, on behalf of ContentNext Media, the parent company of paidContent.org that was sold by the Guardian to Giga Omni Media in February. The ownership of inside.com was last updated on June 13 of this year.

That means that either an ownership transfer to Calacanis has not yet been recorded, or… who knows?

TC has reached out both to Jason Calacanis and Giga Omni Media for comment and we will update as we learn more.

Update: Calacanis comments below: “Inside.com is an awesome domain name.”

(Disclosure: I worked for paidContent.org before joining TechCrunch — although that is coincidental to me writing this story.)