Once upon a time, in 2003, there were two entrepreneurs with a dream. Their names were Evan Prodromou and Michele Ann Jenkins, and they dreamed of a collectively edited global travel guide — a Wikipedia for travel, if you will. So they created Wikitravel. And it went over like the proverbial lead zeppelin. Two years later, a company named Internet Brands bought it from them for $1.7 million; pretty good money for those long-lost days before the startup craze began. And Wikitravel thrived, and lo, it was good.

Until Paradise came crashing down in flames.

For six years Wikitravel worked beautifully. There was some advertising, but nothing intrusive. The tech platform on which it ran grew increasingly ancient and flawed, but it functioned, and that’s all that matters, right? In 2006, true, the Italian and German admins — the unpaid, independent volunteers who curated the site, filtered out spam, edited structure and language, and in essence made it usable — forked all the Wikitravel pages in those languages to a new site, called Wikivoyage. (This was legal because all of Wikitravel’s content was and is Creative-Commons licensed.) However, that was but a minor hiccup. The site continued to draw a respectable half-million visitors per month, and its travel guide to the entire planet grew better and better.

But some months ago the Wikitravel admins grew angry that Internet Brands had neglected their many tech requests for so long and was planning new and more intrusive advertising. And when Internet Brands finally did upgrade its now-ancient technology, the upgrade went the way many back-end upgrades do, which is to say, beset on all sides by locusts and a rain of bloodbugs and failures. And finally the Wikitravel admins threw up their hands and journeyed across the Internet to that free-content oasis named the Wikimedia Foundation, and said, more or less: “We’re sick of where we’re at. Would you like to host a travel site?” And the Wikimedia Foundation pondered, and mused, and eventually decided: “Yes!”

And then all litigious hell broke loose.

Threatened with a fork of Wikitravel hosted by Wikimedia, Internet Brands, after apparently initially proposing a partnership, went and “actually brought a suit against unpaid volunteer contributors James Heilman and Ryan Holliday — for using the word “Wikitravel” in the phrase “Wikitravel community” in promoting the fork,” to quote David Gerard. In response, the Wikimedia Foundation has SLAPPed back and sought declaratory relief from the courts.

I’ll leave all that cut-and-thrust to the lawyers. I just want to mention some of the important lessons highlighted by this all-around debacle:

An interim version of the new English-language travel guide, incidentally, is now live.

(Disclaimer/disclosure; I am not entirely personally detached from all this. I created the app WikiSherpa, which relies heavily on Wikitravel, and last year briefly talked to Internet Brands about the possibility of selling it to them, though nothing came of this. I intend to point WikiSherpa to the new site at some point.)

I leave you with, courtesy of Jani Patokallio, a highly likely diagram of Wikitravel’s past and future: 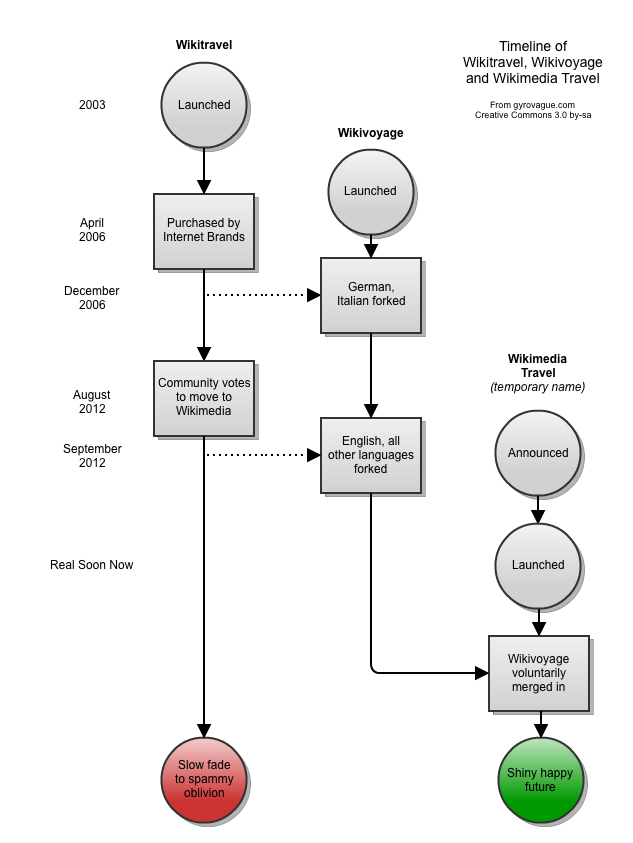