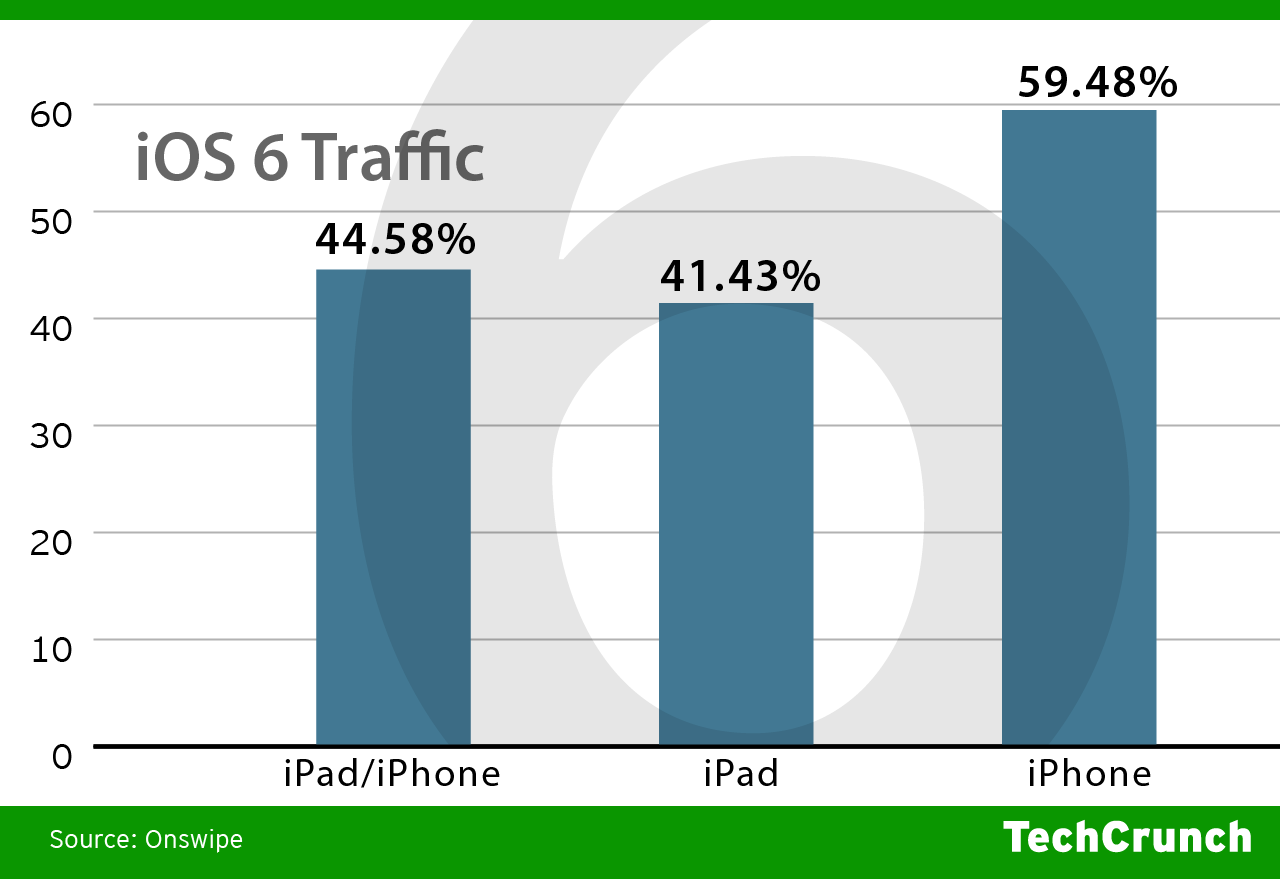 Adoption of Apple’s iOS 6 continues to trend upwards, with touch-friendly website conversion provider Onswipe seeing more users flocking to the newly-released platform, despite its apparent shortcomings. Based on a sample of 100,000 users coming through Onswipe’s partner sites Friday morning, the company is seeing 59.43% of iPhone traffic from iOS 6 devices, and 41.3% of iPad traffic coming from those who’ve upgraded to the latest version.

That means that after just over a week, the majority of those who have an iPhone have already upgraded. Compare that to numbers for iOS 5, which saw adoption numbers suggesting 38 percent of iPhones were on iOS 5 four full weeks after its release. That was an impressive enough adoption curve, especially compared to the competition, but the key difference between the two – iOS 6 being pushed as an over-the-air update where iOS 5 required plugging in physically to iTunes – seems to be making a big impact on the speed of installation. Onswipe’s numbers agree with Pocket’s released earlier this week, but since Pocket is a native app provider that got a lot of press for providing iOS 6 compatibility, which may have driven increased use by iOS 6 adopting customers, Onswipe’s numbers are probably more representative of the general population.

“iOS 6 has photo posting, where you can upload photos and videos from the phone, so now web apps, if they implement that camera feature, publishers know users can take advantage of it immediately,” Onswipe CEO Jason Baptiste told me in an interview. “And for us, they did something in iOS 6 that made Safari a lot better, it’s noticeable, so we know that 41 percent of iPad users are seeing a better experience, that’s great after one week.”

One key advantage of having iOS 6 spread so wide so quickly is that using those new features introduced in the update becomes much less of a risk – publishers, advertisers and app developers all know that the time they put in will result in improved UX for a large part of their target market, so the investment required to get there is more easily justified.

On the consumer side, you could ask whether, in this instance, rapid uptake of iOS 6 is a good thing, since Apple’s iOS 6 Maps seems to be hitting the wrong note with users. So much so, in fact, that CEO Tim Cook released an open letter spotted by our own eagle-eyed Jordan Crook earlier this morning with a rare apology coming out of Apple’s top brass. iOS 6’s wide adoption means a lot of users are already running into the frustrations of Maps, but Apple is clearly committed to seeing this thing through, judging by Cooks’ words, so getting people on board now may be a case of ripping off the Band-Aid as fast as possible, so to speak.

Issues with the update aside, the speed with which Apple can get users onto a new platform is a huge selling factor for iOS in terms of attracting and keeping high-quality developers. Apple itself shared that 100 million iOS users have adopted iOS 6, but Onswipe’s data suggests even more could’ve switched since they first released that number on Monday this week. And that’s very promising news for Apple as a business, and iOS as an ecosystem.