It’s a good time to be a healthy geek — and to start becoming one. Of late, we’ve seen an exponential increase in digital health data, thanks to growing popularity of a new generation of smart, wearable devices that help us track and stay on top of our health. These Quantified Self devices scratch our geeky itch for data and allow us to take doctors and fitness instructors home with us — or out on our jogs. However, while dashboards and analytics are great, for data to really be useful, people have to be able to interact with it. It has to be fun and engaging, cutting through the noise of our everyday routines.

Eli Holder founded Notch.me earlier this year in an attempt to make health-tracking beautiful, creating consumer software that helps people visualize and engage with their health. Holder sold his first startup, Unblab, to AOL back in 2010 and, since then, has been plugging away on Notch. Having struggled to stay healthy himself (like so many others), the core idea behind Notch is that our busy lives make it tough to keep our health at the top of mind, which is obviously a key part of staying motivated and healthy.

So, to help put health back on the priority list, Notch is trying to create a positive health experience by presenting data in a more visually stimulating way: Through personalized infographics. Sure, infographics can be annoying and mind-numbing, but the idea is to create visualizations that lower the bar on ease-of-consumption, making health activity something you actually look forward to. When Notch first debuted in May, its primary source of data came through Fitbit, turning users’ Fitbit steps into an infographic — like this one.

Since May, Holder says that the most-requested feature has been RunKeeper integration, so today Notch is launching a new set of infographics that offer just that. 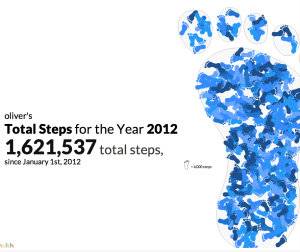 The images show off examples of advanced runners’ achievements (celebrating their endurance), while encouraging non-runners and beginning runners by rewarding them for reaching shorter distances. Every time the user hits a new milestone, the infographic adjusts itself to show another set of graphics and presents a new milestone to aim for.

Holder says that, for now, Notch is focused on running and on adding the trackers that are most popular among the community. The road forward begins with visualizations, the low-hanging fruit, which he hopes leads to Notch being able to let users access real motivation profiles — and build long-term engagement. As of now, Notch is actively pursuing partnerships with all the leading fitness and health software publishers and sensor device makers, offering them a way to add a layer of creativity to static health data.

As for RunKeeper, founder and CEO Jason Jacobs tells us that the company is looking to round out its platform by adding a set of serious motivational tools, like goal-setting and training plans. So, he sees Notch as a cool way to lighten up that experience and present data in a more creative way. While it’s all about adding serious, useful training tools, fitness needs to be fun, he says, and personalized infographics that display your actual health data is a great entry point.

Focusing exclusively on Fitbit at the start made sense for Notch, but it also limited the potential reach of the service, so adding RunKeeper is a step towards a bigger market. To be clear, as it is now, Notch is almost more of a project than a company — an evolving experimentation in data visualization. So far, it has a lot of appeal (and potential), but there’s also a long way to go.