Today is apparently Apple patent application day, and there’s another new one just published and unearthed by AppleInsider that describes a method for inductive charging. “But inductive charging already exists,” I hear you all cry out in unison. That’s true, but Apple’s added a device orientation trick to the mix that could vastly alter the scope of what’s possible via wireless, magnetic field-based connections.

In its patent application, Apple describes how changing the orientation of a device on a “docking” mat would induce different reactions, including just charging, syncing and back up either to a local computer or iCloud, performing diagnostic checks for hardware that may be malfunctioning, or even connecting to AirPlay wireless or tethered speakers, cameras or other devices. 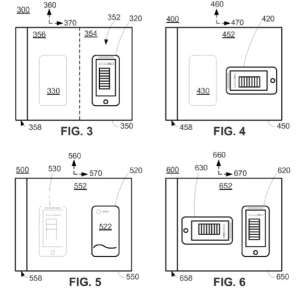 The patent is interesting in light of Apple SVP of Marketing Phil Schiller’s comments at the iPhone 5 announcement with AllThingsD, where he said that inductive charging actually provided more of an inconvenience than any added value to consumers, since they ultimately sill have to plug something into the wall.

Inductive charging has an accepted standard, however, called the Qi inductive power standard, which is designed to help speed adoption by giving manufacturers one implementation of the tech that will be compatible with anything else using the same standard. Even so, it’s been slow to get traction among consumers, mostly because it isn’t built into a lot of hardware directly, and because as Schiller mentioned, you also still need an accompanying device tethered to a wall to use it.

Apple’s implementation of inductive charging as described in this application, however, is clearly designed to provide something more than just charging, likely in an attempt to demonstrate clear additional value to users. If you’re facing a tough adoption curve for new tech, the best way to get people on board is to make it obvious what they get out of using it. Offering no clear benefits to users is the reason Apple didn’t put NFC into the iPhone 5, and it’s probably the same for induction charging; it’s just not bringing enough to the table yet. In the next few years, the ideas sketched out in this patent application could change that.