We’ve just learned that the iPhone 5 camera may be faulty, showing a purple haze (yep, I said it) in certain lighting conditions. If you take a picture with the iPhone 5, and there’s a bright light that’s outside of the frame, you’ll see a purple tint come across the image.

This is possibly due to the Sapphire glass used in the camera’s lens. As we all know, Sapphire is a purple/bluish gem, and though the purple tint isn’t noticeable without that bright glare from an off-screen light, it can really fudge up some pictures if the conditions aren’t just right. The phone is smart enough, however, to compensate in certain situations.

There is also a chance that the purple haze is caused by light overloading the imaging sensor.

When the iPhone 5 was announced, Apple never made mention of any optical coatings, which tend to reduce these types of issues with glare.

We’ve tested cameras on two separate iPhone 5s and seen the same exact result. Luckily, when a source of bright light is actually inside the frame, there is no purple issue. We’ve tested the camera in both indoor light (a lamp) and outdoor light (the sun), so there’s no difference between natural light or otherwise. Though, the issue does seem more pronounced in artificial lighting conditions, when the source is either just out of frame or on the edge of the picture. 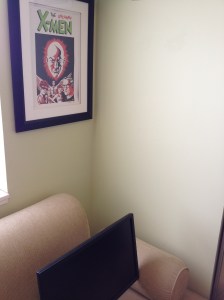 There have been a few disappointments with the iPhone 5 — the Maps app is abysmal, the aluminum back plate scratches like a cat in heat, and there’s really nothing all that special to be excited about in terms of innovation. But we’ve all had fun playing around with Panorama, and it’s quite impressive that Apple was able to fit the same 8-megapixel sensor in a much thinner frame.

We’ve reached out to Apple to get a comment on the issue, and are waiting to hear back. We’ll update if they reply.

Update: We’ve heard reports on Twitter that the same issue is true with the iPhone 4S. They are correct, there is a very slight purple haze on images taken under the same lighting conditions with the 4S (pictured, at right), however it is far more pronounced on the iPhone 5.

Update 2: After letting the news stew for a while, we’ve learned that the purple haze issue was first spotted in Anandtech forums, where many users are suffering from the same thing. We’ve also noticed that the issue persists during video capture.

We’re still unsure what the issue is, but theories range from the fact that Apple changed the noise on the iPhone 5 camera from speckles to smearing to the camera’s sensor getting overloaded with infrared.

We’ll hit you back if/when Apple ever responds.