This past summer, TaskRabbit, the online marketplace letting people outsource errands and odd jobs, unveiled a feature extension for its iPhone app called “Deliver Now,” which lets users get on-demand delivery of anything within the city of San Francisco on weekdays between 9am and 7pm.

Starting today, it won’t be just iPhone users in San Francisco that can enjoy on-demand Dynamo Donuts (or Tartine croissants, or a new pair of socks, or whatever) within an hour without leaving the comfort of their apartments.

This morning TaskRabbit is launching a web-based version of Deliver Now, which will be accessible at TaskRabbit.com/Deliver-Now. This means that anyone with a computer or smartphone and a Wi-Fi connection can use the Deliver Now feature.

The other major player in this space is the urban logistics startup Postmates, which also debuted an on-demand courier service to San Francisco residents with an iPhone app this past summer. Today’s launch, however, makes TaksRabbit the first to launch an on-demand courier option to anyone on the web.
Meanwhile, more scaling is on the way: The people at TaskRabbit tell me that they’re planning to roll out Deliver Now to other markets “in the next few months.”

And indeed, what will be really interesting to see is how these services scale to cities beyond San Francisco. The city by the Bay is a great hub for early adopters, but it is relatively tiny — famously just 47 square miles, with a population of some 800,000 people. Promising reliable and snappy deliveries in a more sprawling and populated metropolis on the order of London, New York, or Chicago will really put these on-demand apps to the test.

Here are a couple of screenshots of Deliver Now for the web in action (click to enlarge): 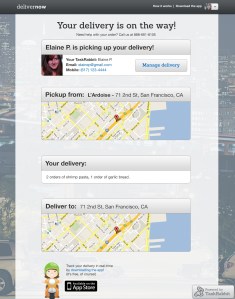 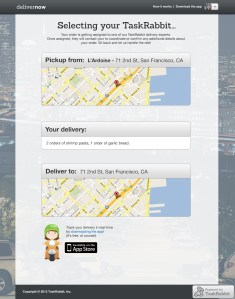