Mobile and social gaming have exploded in popularity over the last few years and both are quickly becoming multi-billion dollar industries. With an estimated 35 million players in the U.S., fantasy sports has become a sizable market in its own right, with growth expected to continue as it reaches new players through increasingly mature mobile and social channels. It’s no surprise, then, that Wedge Buster sees a big opportunity at the confluence of these three growing markets.

So, today, the young Los Angeles-based startup is launching a platform for social and mobile sports games in open beta. At launch, the platform will live on Facebook, with its 100+ titles available exclusively as Facebook gaming experiences. However, the startup has a mobile offering in the works, which it plans to launch in October to bring its asynchronous sports gaming beyond Facebook’s garden.

Of course, while console giants like EA are busy moving their big sports franchises into social and mobile arenas, the startup still sees plenty of opportunity to own the “Zynga for sports” niche. Wedge Buster Founder and CEO Scott Philp tells us that, in spite of the interest, few (if any) sports-focused companies have realized the full potential of the platform — in other words, no one’s nailed Facebook yet.

Having worked in social gaming and fantasy sports for over a decade (most recently at QUICKHIT Football, which he sold to Majesco Entertainment), Philp says that he’s become fully aware that the model for sports gaming is broken and that the key to doing it right is a cross-channel strategy that gives equal weight to developing lightweight, asynchronous games for each of the “big three” — social, mobile and web.

Over the last year, Wedge Buster has acquired and developed over 100 games during its private alpha, attracting more than 250K registered users, who are spending an average of 13 minutes per session and coming back multiple times a day, he says. During its alpha, the startup sold sponsorships to brands interested in reaching the male, sports-loving demographic, building sponsorship into the platform to give advertisers the same kind of experience they’re used to in dealing with FOX Sports, ESPN, Yahoo Sports, etc. 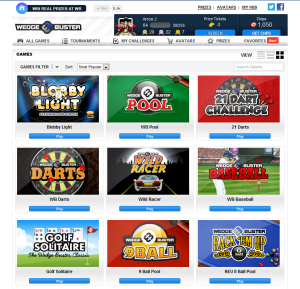 Going forward, the CEO says, that the team is looking to build its revenue strategy not only around sponsorships, but in-game transactions as well, along with building partnerships with the big players in sports media to help push its games out over a broader network.

To do that, Wedge Buster will also have the help of a few recognizable names in the sports world, as it also announced today that it has closed $2.2 million in Series A financing. The round was led by 37 Technology Ventures, with contribution from sports-focused investment bank, Park Lane, the former CEO of Motorola, along with several other angel investors.

Chief among these investors, and key to helping Wedge Buster build and promote its brand, are Super Bowl MVP (and quarterback of the New Orleans Saints) Drew Brees and professional skateboarder and familiar TV personality Rob Dyrdek, perhaps best known for his roles in MTV’s “Rob and Big” and “Ridiculousness”.

Dyrdek, for one, says that part of the reason he got excited about Wedge Buster and decided to invest was the potential to build games around his media properties, leveraging the platform for distribution and as a targeted way to reach sports gamers. And therein lies another potential value proposition for Wedge Buster — to give both media properties and sports figures a channel to promote and distribute their own titles, with the startup potentially taking a cut of sales or at least benefiting from big name promoters increasing brand recognition.

It’s difficult for game developers to scale one-off games, so it’s a smart play to go for the platform play, aggregating sports, fantasy sports and social games in one place. It can then use the type of head-to-head asynchronous challenges, leveling, achievements, currencies, engagement loops — tried-and-true game mechanics — to keep people engaged and interacting on the platform. Of course, that said, it’s all about offering quality games, which is obviously the most important (and challenging) part. So far, Wedge Buster has plenty of selection, but it has to balance quality with quantity if it wants to be the Zynga for Sports. 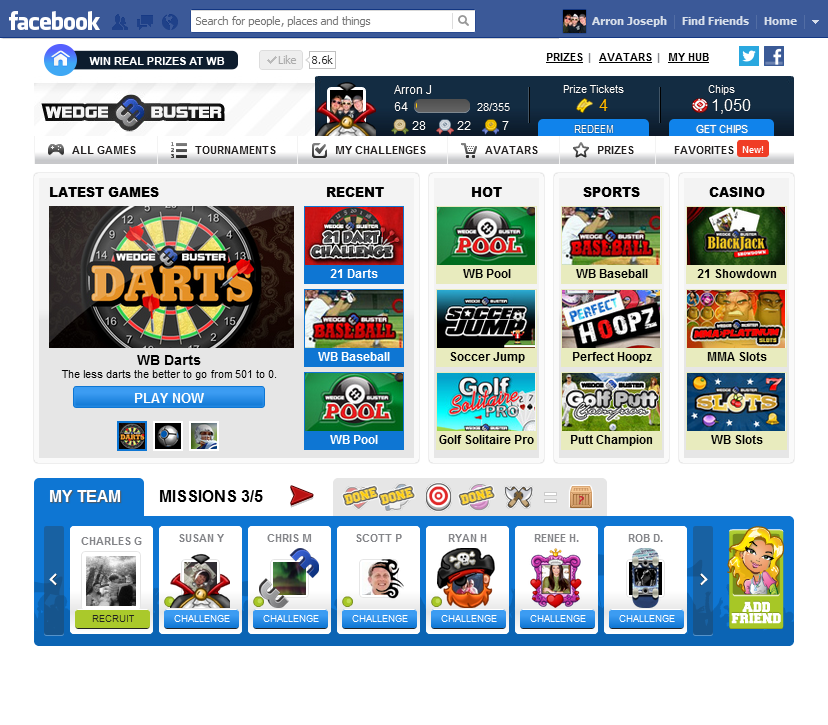