This morning, Apple’s marketing chief Phil Schiller reportedly told a user that the iPhone 5’s aluminum back naturally makes it more prone to scratches. That’s all fine and dandy, but that’s only a small part of the problem. The real problem Apple seems to be having is with its quality assurance programs over at Foxconn. Now that more pre-ordered phones are arriving, it’s becoming pretty clear that despite Apple’s assurances that every phone is being built with nanometer precision, something is off with this first batch of iPhone 5s. How do I know? I just got one.

My UPS guy stopped by an hour ago and delivered my phone. Here are the problems right out of the box: something is rattling around the bottom of the phone, there are dents on the back where the aluminum back meets the class parts at the top and bottom, there are a few small but noticeable scratches on the aluminum back, too, and there is a discolored part right above the ringer switch. 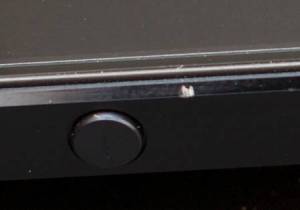 I’ll be the first to admit that this is the epitome of a First World problem, but this is also a device from a company that makes a big deal about how its phone was “made with a level of precision you’d expect from a finely crafted watch – not a smartphone.” Supposedly, “each iPhone 5 aluminum housing is photographed by two high-powered 29MP cameras. A machine then examines the images and compares them against 725 unique inlays to find the most precise match for every single iPhone.” Clearly, Apple needs to install some of these cameras at the end of the production line, too.

I’m clearly not the only one with these problems. Apple’s own discussion forums are full of complaints about scratches right out of the box. There are also plenty of reports about loose batteries, bad screens and other issues.

We already know that something is rotten in the land of Foxconn, so it’s hard not to wonder if some of these issues aren’t starting to affect Apple’s ability to produce its phones with the quality we’ve come to expect.

I’m off to see the geniuses at my local Apple store. Let’s see what they have to say.