According to the Center for Disease Control, 25.8 million Americans (or 8.3 percent of the population) have diabetes, while an estimated 79 million people (aged 20 and older) have prediabetes — making it one of the most pervasive diseases in the U.S. Startups like Rock Health grad Omada Health and Glooko are addressing diabetes head-on, from prevention and intervention to making the lives of those who live with the disease better — through technology.

Glooko launched in late 2011 to bring those with diabetes a better way to collect and view the information they need to control their blood glucose readings, allowing them to download readings from their meter to their smartphone, for example. Essentially, then, Glooko is a digital logbook for those who regularly check their blood sugar levels. While you’ll find dozens of such logbooks in the App Store, most of them require the owner to manually enter their blood sugar data.

Glooko is differentiating itself from the pack by attempting to become agnostic to the type of glucose meters people use (of which there are many), allowing a wider set of people to connect their meters to their smartphones. That means that users don’t have to purchase and learn how to use a whole new measurement device.

Today marks an important step forward for the startup in its move toward being device agnostic: Glooko announced that it is releasing a new version of its “Glooko Logbook” app for iOS devices that supports six additional blood glucose meters, including those from Bayer, Walmart and ARKRAY.

This is especially relevant, as Walmart announced its new “ReliOn” meters back in July with the promise that it would save its customers $60 million annually. Supporting Walmart’s brand, Glooko co-founder Sundeep Madra says, goes along with its philosophy of innovating in conjunction with what people are already using. Succeeding in the health care space can mean having to go against what the tech-savvy startup mentality would do — if it’s too complicated and too new, too fast, it can be tough to succeed. But Walmart reaches a massive set of the population, and by supporting its meter, Glooko is opening itself up to a big audience. 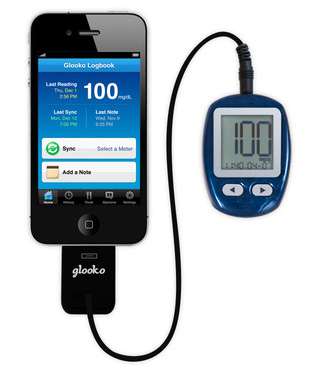 But more importantly, with these new additions, Glooko now supports 17 different blood glucose meters, so now users can just connect their $40 Glooko cable to one of those meters and an iOS device and download all their readings into a Logbook with a few clicks. The app also gives users the ability to take notes about carbs, insulin, and other wellness factors, and lets them share their logbook summary with their doctors via email or fax.

Diabetes is one of the fastest-growing diseases, so it’s good to see the startup making progress in helping 25 million Americans to manage their health. And while this news may seem somewhat incremental, it’s also a sign that the startup is getting closer to meter agnosticism, a critical part of bringing that better health management to all of those 25 million.