Fresh off the heels of a $1.2 million round of funding, the furniture-focused e-commerce site Deal Décor is today announcing its official nationwide launch. The company, which we once referred to as a “Groupon for Furniture,” to be fair, isn’t really a rip-off of the Groupon business model. That is, it’s not about using group-buying to promote merchant coupons. Instead, it’s about using group-buying to power factory-direct deals in order to offer consumers a 30%-70% savings on furniture and other home goods.

Like many new e-commerce startups today, Deal Décor is essentially using the Internet to flatten the traditional supply chain. Unlike quasi-competitors One Kings Lane, Gilt Groupe or Ideeli, the company doesn’t provide discounts on high margin retail items nor does it run flash sales. The business model here is that the startup works directly with factories to find which items are the most popular, then tacks a bit of extra volume on the end of a production run. Those items are then sold online at discounted rates. It now even has an office in China, on the factories’ doorstep.

Last fall, the company ran a small pilot program in San Francisco for two weeks, and ended up selling around 65 sectional sofas for $399 apiece. This was the same item Amazon had for $706 and Walmart had for $829, for comparison purposes. That sofa is available now for $499 as Deal Décor launches nationwide (excluding Alaska and Hawaii). The company has also teamed up with a new distribution partner, HomeDirect, which also does the national distribution for Pottery Barn, Crate & Barrel, and Macy’s. That change has raised delivery fees from $33 to $49, but Deal Décor is not making profits off of delivery, only sales margins.

In San Francisco, the company partnered with a few local coffee shops to display the sofa on sale, allowing customers to see the item in real life before purchasing. According to co-founder Craig Sakuma, who started the company with Gregory Lok, (together, both have retail experience at Home Depot, Target, Home Decorators Collection, and Williams Sonoma), around 20% of customers who bought had first checked out the item in person at one of these locations. But that same option won’t be available outside the Bay Area as Deal Décor goes to launch across the U.S. That shouldn’t be a problem, the company believes, because many consumers are comfortable buying items online these days. Sakuma also adds that they’ve already seen 90% of traffic to their site from outside the Bay Area, even prior to the official launch. 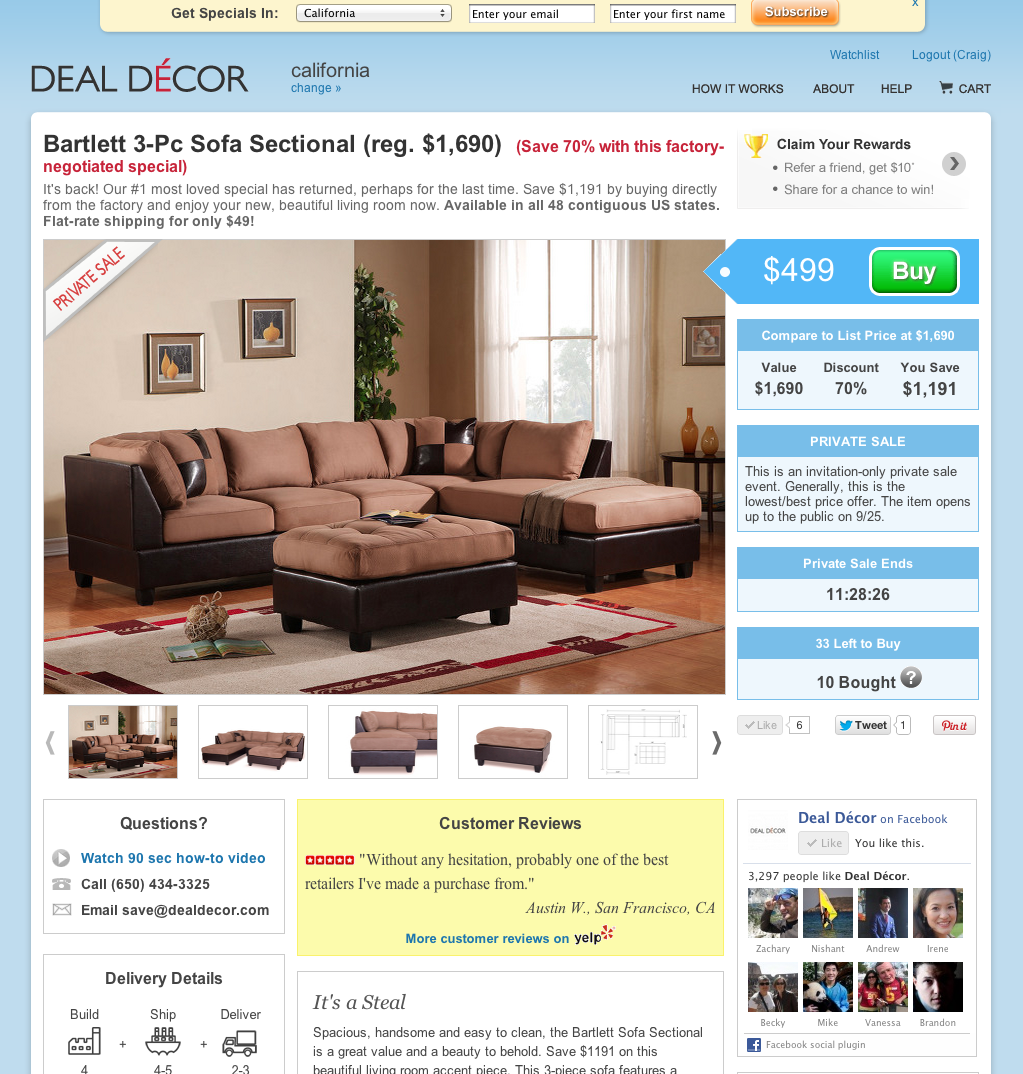 Going forward, Deal Décor plans to offer a new product every week, with plans to sell a variety of items including a kitchen island, for example, and even a dining set. The company is also planning to begin incorporate customer feedback into future production runs, by letting consumers vote or “like” items to indicate their buying intent. As for whether Deal Décor could ever become an e-commerce site with a larger online store, Sakuma says it’s “too early to tell.”

“We’re open to that idea, but a lot of that depends on what consumers want and whether our factories are able to support that diversity of orders,” he says. “Time will tell…but we don’t want to sacrifice the amazing deals we offer customers.” In order to offer those deals, the site still needs to drive demand to a smaller number of items than an online store would, he explains.

You can check out the current deal here.