To address the new reality of our data driven world, we need better ways to manage the network. Google and later Amazon Web Services (AWS), embarked on that journey long ago. Now the market is beginning to catch up with new networked environments that are controlled more by software than physical switches, routers and controllers.

Apigee is now providing management for these Software-Defined Networking (SDN) environments with a new API management offering needed to build, manage and scale applications for the programmable data center.

This is not a simple thing to understand. But neither was the web in its earliest days. In that other time, developers built software on the servers. They created what we now call “stacks.” As the web gained momentum, developers began thinking of new ways to build applications. By 2006, AWS emerged with a way for developers to create stacks on virtual servers. These virtual servers still had to run on physical hardware but the virtual machines could be controlled through automated methods.

In the meantime, the software stack built on physical servers began to show its faults. Servers needed to talk to other physical aspects of the network. Virtualization helped and created a new market for companies like VMware. But people in IT have not been able to keep up as more data has entered their environments. It has meant a boom for storage players like NetApp and EMC. Cisco could sell networking equipment for a premium. The result for many data centers is a tangle of networks, big boxes and endless cables that continually need reconfiguring as more storage is added.

Apigee sees a future that turns data centers more into programmable environments that we can control through APIs.  This is how AWS operates to some extent. And it is the path OpenStack is following to create federated environments that would create an underlying infrastructure for connecting different, heterogeneous cloud environments. 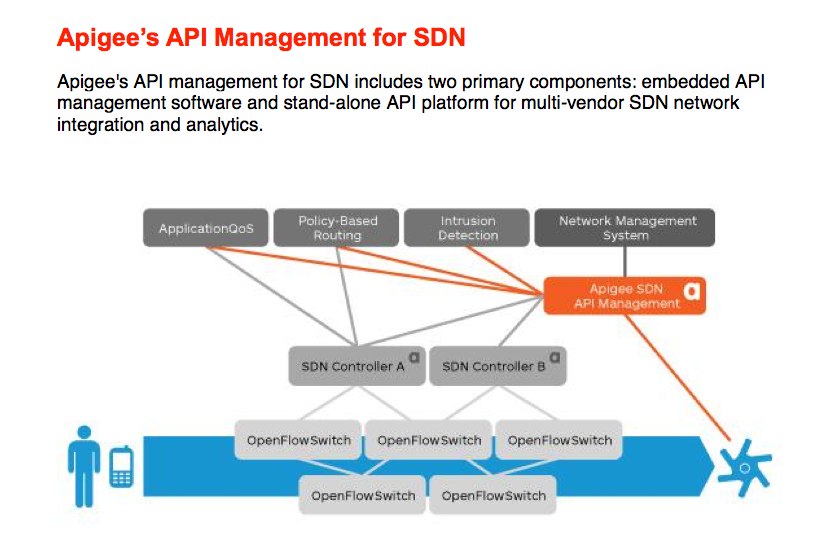 Apigee’s API platform for multi-vendor SDN is stand-alone software that can integrate network management systems with SDN controllers from multiple vendors through real-time API transformations. This software includes network analytics, enabling dynamic policies on the controller itself, as well as network-based programs that can use trends to trigger a change in network behavior. Apigee’s software reads network traffic into a domain model and publishes network traffic analytics as an API.

This is all heady stuff and I encourage you to read Sam Ramji’s white paper on the topic that can be found on the Apigee web site. It may seem complex but grocking it will give you new appreciation for what it is meant when it Ben Horowitz says software is eating the world.  In this case, it’s the network that serves as the banquet.