SimpliVity has raised $25 million in a Series B round for its “data center in a box,” technology. Kleiner Perkins Caufield & Byers (KPCB) led the round with existing investors Accel Partners and Charles River Ventures also participating. The funding brings SimpliVity’s total to $43 million. The company came out of stealth last month just before VMworld.

SimpliVity’s value derives from what analysts say is its capability to simplify an ever complex IT environment while simultaneously providing a high degree of functionality that addresses the underlying issues with existing data architectures. OmniCube is the company’s flagship product. Analysts say it’s the technology’s capability to consolidate multiple products within one infrastructure that makes it formidable. Currently, companies may have mainframes from IBM, servers from HP, networking gear from Cisco and storage drives from EMC. SimpliVity’s scalable pool of shared resources means it can simplify a complex data center down to one or two boxes. 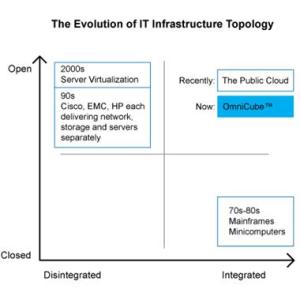 Nutanix, IBM PureSystems , EMC and NetApp Flexpod figure to serve as some of SimpliVity’s competitors. The competition stems from an IT market undergoing significant change. A new generation of providers such as Amazon Web Services (AWS) now welcome a growing number of enterprise customers who want to shed the ever expensive data centers that they have managed for the past 20 to 30 years. Further, they have run out of room to store servers that keep mission critical apps running.

CEO Dorom Kempel says SimpliVity is the corollary to AWS. Services such as AWS operate on networks that scale out across tens of thousands of servers. The topology, as Kempel explains in a blog post, is fully integrated and open. He makes the claim that SimpliVity is the corollary topology – integrated and open – that an end-user can deploy on-site.

SimpliVity is another disruptor in the fast growing market for converging technologies that integrate compute, storage and networking. Nutanix has already had tremendous success of its own.  The company raised $33 million in a Series C funding round this summer. The round gives Nutanix a total of $71 million in funding and positions the company for a potential IPO.

Kempel says SimpliVity has technology integrated that Nutanix relies on third parties to provide. For instance, he says Nutanix does not have de-duplication and compression. He says that alone will give SimpliVity a chance to differentiate in a market with plenty of competition.