Apple’s iPhone 5 hit store shelves and consumer hands today, and I got a chance to score some hands-on time with a couple of the games that were announced at the event where Apple’s smartphone was announced. EA’s Real Racing 3 and Natural Motion’s Clumsy Ninja. Neither game is available yet, but both are very playable in their current forms, and excellent examples of what Apple’s hardware updates make possible for gaming.

Real Racing 3’s gaming mechanics are simple, and will be familiar to anyone who’s played the others in the series. But where it shines is in the huge improvement in graphics performance. The intro video is on par with some current gen home console experiences, and gameplay is as well. The fact that gas control is automatic is a little bit different than what console gamers are used to, but the physics, the textures and the backgrounds all really do live up to the hype.

The game really shows off the power of the new A6 processor and improved graphics processing, and it doesn’t seem like it’s breaking a sweat. Apple provided EA with only enough access for them to come up with a tech demo that was playable at the show, too, owing to their love of secrecy, so what I got hands-on time is likely just a taste of what’s possible when developers have full access to the platform, without quick turnaround requirements and other restraints. That’s very good news for gamers. 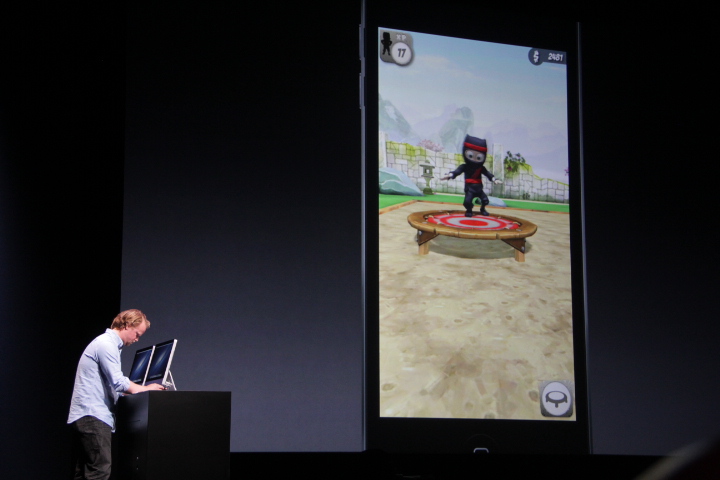 As for Clumsy Ninja, while I didn’t have the chance to see much, what I did see was equally impressive, albeit in a different way. The experience feels unique, and uniquely suited to a touch-based interface. It’s the kind of product that’s clearly designed to be at home on the iPhone, and one that couldn’t really live anywhere else (despite being fairly similar to Microsoft’s Kinectimals series of virtual pets). Even with just a brief play period, you can tell that the use of AI at work here puts this above your average pocket pet application. And again, the graphics and animation really show off the iPhone 5’s improvements over previous generations, and it feels very close to being a shipping product. This one seriously could be the iPhone 5’s Angry Birds.

The iPhone has long been a pretty good gaming device, but it’s starting to cross over into new territory where it’s easy to see it competing with dedicated offerings from other companies. In particular, they leave even the 3DS and Sony Vita feeling a little out-dated, if only because the iPhone 5 provides so much else besides. I can’t wait to see what developers like Infinity Blade’s ChAIR, along with innovative indie dream teams like Sword & Sworcery’s Capybara can do with this new hardware.