We’ve seen that the new Apple-created iO6 map which replaces the Google Maps app has had – how can we put it – a little bit of a backlash.

But this morning, as Europeans woke up to a little screen encouraging them to download the new iOS, many were not aware that their cherished Google Map would go puff into the ether and be replaced with something rather less detailed than Google’s – given Google has had a seven year head start on maps.

This morning I asked my 40,500 Twitter followers, who largely hail from Europe, what they though of the new Apple iOS map. The answer? Not much.

As @winjer pointed out, Apple renaming the English town Doncaster “Duncaster” was “quite special”.

But it started to get a little more serious when iPhone owner @mptv tweeted me pointing out that Berlin had been renamed “Schöneiche bei Berlin”, though they did admit that the iOS app’s positioning was “very accurate” (so, handy so long as you really do know you’re in Berlin). 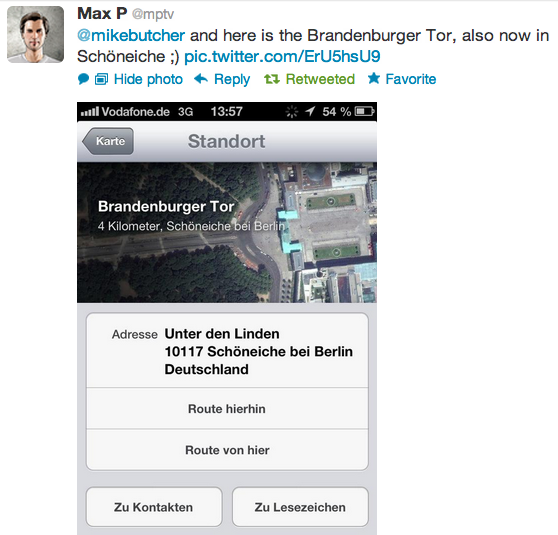 In general, there will be plenty of Europeans who feel they have been “screwed on 3D” (as one person put it to me), but there may be more serious issues to content with.

For instance, if you’re an iPhone user in Russia – not a trivial market – you will now be far more inclined to use maps provided by local search giant Yandex than either Google or Apple’s. Not to mention annoying things like Kiev (in nearby Ukraine) being misspelled.

Meanwhile over in Ireland, they appear to have sprouted a new airport with Apple’s map designating “Airfield Park” in Dublin as an airport (it’s not). In Israel, “chunks of roads are missing, even from major cities” tweeted one user. This is odd, given that Apple is using Waze data, largely thought to be better than Google’s for maps of Israel.

One business traveler site pointed out, that searching for London can sometimes bring you to the city in Canada, and you need to type “London, UK” if you definitely want the British city. Admittedly though, the issue is patchy and seems to vary between users.

The problem is that the location data the iOS app uses (from Yelp, TomTom and others) is less comprehensive than Google’s. Thus, major hotels in Tokyo are missing and the app can’t find the large Paddington Station in London. And that’s just a couple of examples.

The lack of detail in the iOS map is also hitting users smack in the face, further a field.

If you’re in Jakarta, Indonesia, good luck trying to find your address.

And Shinjuku station in Tokyo looks totally different, and lacks the complexity of Google’s map.

It’s to be hoped Apple takes all this feedback and starts improving its app.

But speaking as someone who travels a lot in Europe, the Middle East and Africa, I am tempted not to upgrade for all the reasons above, at least not for now. And that’s saying something from an Apple fan like myself.