Netgear unveiled an all-new lineup of streaming media players today, including the NeoTV, NeoTV PRO and NeoTV MAX, available for $49.99, $59.99 and $69.99 respectively beginning today, September 20. The three devices all represent significant upgrades to Netgear’s existing line, and add more content sources and HTML 5 support to really help these streamers compete with other options on the market, like the Apple TV and Roku’s similarly priced and specced streaming boxes. Also new is a redesigned Push2TV media streamer for pushing content from mobile devices and laptops to the big screen.

All of the new Netgear line offers channels from Netflix, Vudu, Hulu Plus, YouTube, Best Buy CinemaNow, Pandora and Rhapsody to name a few, and each also boasts enhanced internal specs to make for a better overall experience. 3D content support for Vudu is new, as is the addition of Netflix’s Just for Kids interface for the younger set, and new HTML 5 capabilities (which Roku hardware doesn’t yet support) that Netgear thinks will help its latest lineup compete with the top dogs in the industry, since it’s a standard being adopted by plenty of content producers trying to get onto smart TV platforms.

“We keep adding content, and bringing HTML5 to this box allows us to provide a couple more content providers that we didn’t have before,” Damir Skripic, product line manager for connected entertainment at Netgear said in an interview. “A lot of content providers are moving to HTML5. We’re talking to TuneIn radio, we’re talking to Sling Media for their Sling player, we’re talking to all HTML5 guys that will allow us to differentiate ourselves and continue to enhance the value of the product.”

He also believes that the changes to hardware, and content sources Roku doesn’t have like Vudu and YouTube will help it get a leg up. Roku however just announced that Vudu would be coming to the platform, and said it was also working with YouTube on an official app, as it priced and dated its new Roku stick ultra-compact streaming media player.

As for what the new Netgear hardware offers, the NeoTV at $49.99 has a built-in Ethernet port and built-in N150 Wi-Fi, as well as a basic remote. Stepping up to the NeoTV PRO at $59.99 gets N300 Wi-Fi, as well as Ethernet, but introduces Intel Wireless Display for streaming from Windows computers with Intel chips. Finally, the top-end NeoTV MAX delivers a remote with a full QWERTY keyboard on the back, N300 Wi-Fi and Ethernet connectivity, a MicroSD port for pluggin in your own locally stored content, Intel Wireless Display, DLNA streaming and 3D Vudu support for $69.99. You can see how they size up to each other and the competition in the chart below from Netgear. 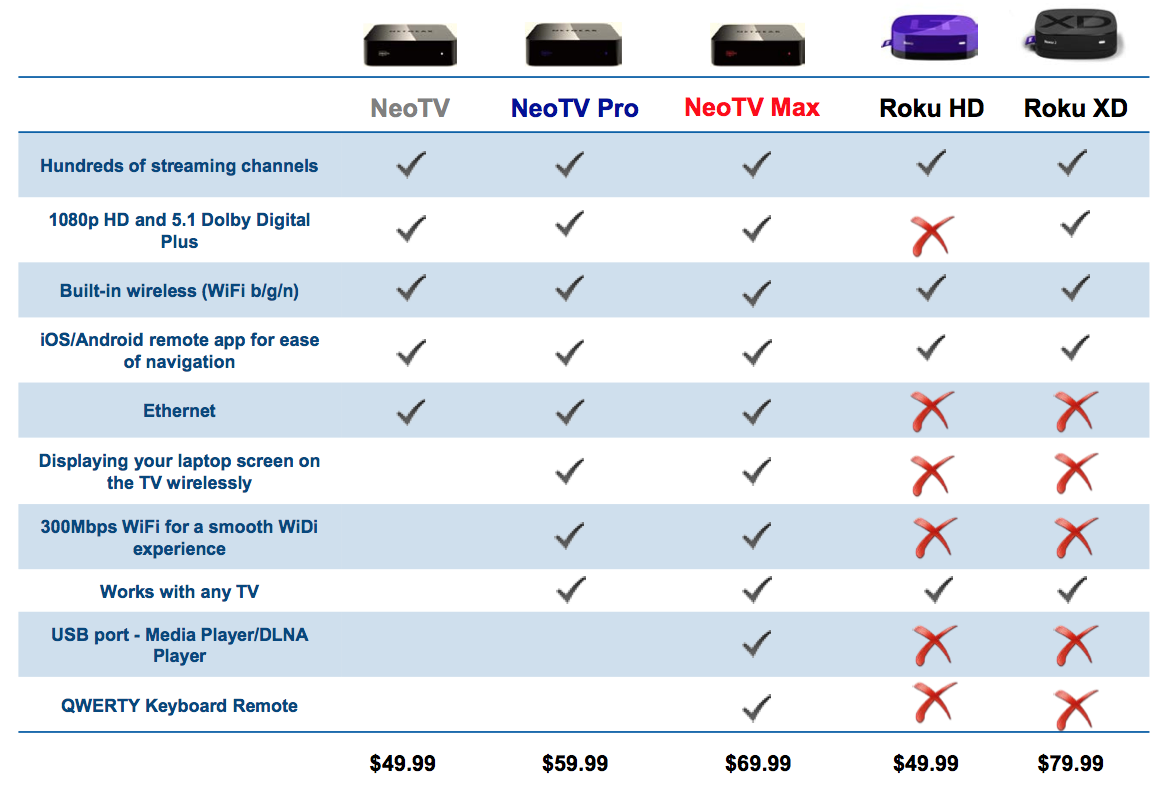 Netgear is also introducing a new version of its Push2TV streaming adapter today for $59.99, one that’s much smaller than the previous generation at around the dimensions of a credit card, albeit thicker through the middle. The tiny device makes it possible to stream content and mirror the display from your laptop, smartphone or tablet using either Intel Wireless Display or the Wi-Fi Alliance’s Miracast standard. It’s basically like having a tiny Apple TV that works with a range of devices (though not Apple smartphones, it’s worth noting) and plugs into your TV’s USB port for power (though an adapter for a wall outlet is also included). At a third the size of its predecessor, this is actually a remarkably useful device, so long as you have a Miracast-supported device, the first of which were recently announced and include the Galaxy S III and LG Optimus G.

All of these offerings definitely add some excitement to the Netgear line. Will it be enough to help them take on Roku? That’ll likely depend not only on content, as Skripic suggests, but also on where Roku is headed next with respect to hardware, since the latest lineup was introduced in July 2011, and is likely due for an update relatively soon.