Today I dropped off TC writer Romain Dillet at Apple’s 5th Ave flagship store in New York City, where he’ll be waiting in line for the iPhone 5. He’ll be bringing you updates from the front lines all day, and through the night, until doors open tomorrow at 8am Eastern. But as I helped him get set up, I noticed something interesting.

Everyone in line — about two or three dozen of them at this point — was wearing a branded T-shirt. And no, I don’t mean Gucci, American Eagle, or Nike. I mean tech brands, like Vibe, Gazelle, and Otterbox. Aside from Romain, the only other folks in line are either buying the phone for their employer (and being paid to do so) or part of the Occupy Apple (or, more recognizably, Occupy Wall Street) movement.

My question, then, is where have all the fanboys gone?

I remember a time when the iPhone line was filled with die-hard Apple fans, waiting for the next hot product. Tomorrow morning, that will be the case. But 24 hours, two days, or as many as seven days before store doors open, the only folks camping out in front of the store are brands, including Occupy.

Now, this isn’t the first time that the iThing launch extravaganza has attracted publicity seekers, and some of them even have an excellent cause. But it’s certainly worth nothing that the fanboys are missing from the equation a day before launch time, with one slight exception (which I’ll get to momentarily).

There are two sides to this coin. The first is the brands plugging their company. This morning, I saw at least a dozen different media outlets strolling back in forth in the line, conducting interviews and getting B-Roll.

Since the front line is made up of Gazelle, Vibe, OtterBox, and BuyBack World t-shirts, most of those interviews will include plugs for those companies. OtterBox is even giving away backpacks to iFans in line sporting one of their yellow shirts.

“From across the street, it probably looks like the dock of an Apple product,” said the very first person in line, a representative from Vibe. “We’re all just bouncing app icons.”

To be fair, the Gazelle squad doesn’t actually work for Gazelle. Instead, the company is “sponsoring” the first five people in line (aside from the Vibe guys, who are sponsoring themselves) by buying their phones. In exchange, these fanbois (and gals) are wearing Gazelle t-shirts.

Gazelle is also sponsoring the first five folks in line at the Grand Central Terminal store, along with constructing a “pop-up shop” where users can trade in their phones on the spot, and a giant cash machine. You know, like this one. 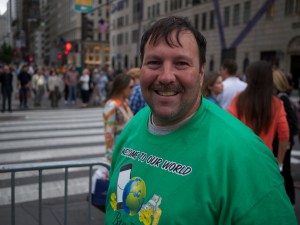 The same is true for Greg Packer, who has done the iThing waiting line too many times to count. He’s being sponsored by BuyBack World, while Vibe and Otterbox are actually sending employees to stand in line and field interviews, take pictures, etc. Fun fact: Greg Packer, a Huntington, NY native, was first in line for a new iPad.

There’s also one guy in line with a cardboard sign, explaining that his employer is making him wait in line in his stead.

The other side of the coin is Occupy. They seem to be doing interviews like all the others, representing Occupy Wall Street (and the 99 percent) in the media. But their plan has little to do with the iPhone 5. They, instead, plan on selling their valuable spots in line to the highest bidders, with various ideas as to how to use the money. 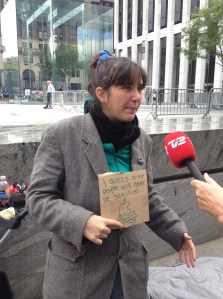 Shiloh Coral, a young woman from Florida who is currently homeless, plans to use the money from her spot in line to buy a new outfit. She has a job interview tomorrow, for which we wish her the best of luck.

When asked if there might be any mayhem tonight from the protestors, she simply said, “I don’t know what’s going to happen.” Most of them are quite docile as it stands, but many of them are currently away at a rally, the Occupy crowd may grow as the day progresses.

But it’s also a well-known fact, many of the Occupy protestors are not violent people. They just want to be heard. With a rough economy, using the iPhone launch is a much better way to make some cash than straight-up pan-handling.

One exception to both the brand ambassadors and the Occupy clan is a young lady. She’s homeless, but not with the Occupy clan, and said she simply wants to buy her very first cell phone. The iPhone 5 is a wise choice.

In the end, Apple has done what they’ve always done: they’ve turned one of their products into a way for others to make some money, whether through advertising or simply selling a spot in line. And in no way is that a bad thing. Smaller companies like Vibe will get great publicity for this, and Shiloh could land that job after sprucing up with her newly earned cash.

It is what it is.