Moment.me is a new iPhone application that automatically aggregates photos, videos, and tweets from social networks, and then organizes them into multimedia albums it calls “moments.” It currently supports Facebook, Twitter, Instagram, and Google+, meaning it sources the content from those networks to create these moments, so you don’t have to change any of your current sharing behavior.

The system works using a proprietary “smart-matching” technology to determine which pieces of content should be organized together. When an event is ongoing, a red “Live” banner appears, indicating that updates are still coming in. 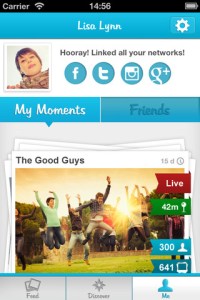 “We saw an unfilled void in the social web,” says CEO Ronny Elkayam. “Photo and video sharing sites were popping up all over, showcasing people’s experiences, while at the same time, people were tweeting to their followers while at live public events – from concerts and parties to political rallies. However,” he adds, “there was nothing around that collected all the pics, videos, and tweets from an experience and presented them in a format where people could see 360-degree views of the entire experience.”

With Moment.me, the end result is something which is very much like Flock, the new shared photo albums app from Bump, which lets you automatically share photos you snap at the same location with any of your Facebook friends. And by “share,” I mean without having to first post them to Facebook, upload them in the app, or really do anything other than install and configure Flock on your iPhone. (It’s brilliant, actually, and I’ve been evangelizing it to my family and friends.)

Moment.me has a similar idea, but the difference is that it doesn’t require others to actually use the app to provide value. “Even if a user is the only one in the room with the Moment.me app, if they’re hanging out with people they’re connected with in their social networks, they’ll still see great Moments with their friends’ content included,” explains Elkayam. “We call this the ’empty room scenario.'” 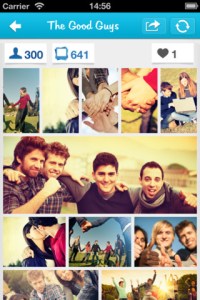 That’s an interesting concept, and it could be a big differentiator for Moment.me, but in practice, I found myself questioning some of the results. For example, Moment.me discovered my tweets and photos from Thursday at TechCrunch Disrupt SF 2012, but only matched me with one other person, a Facebook friend who was also there. Surely someone else on my Twitter, Facebook, Instagram (etc.) networks was also sharing content? Right??

It sounds like Moment.me’s proprietary matching tech still needs a tweak. Or maybe apps like this just work better when people actually install them on their devices! (So um, please do that.)

In terms of user privacy, Moment.me complies with everyone’s social network privacy settings. That means if you’re posting to a select group of friends on Facebook via lists, that photo doesn’t (creepily) become available in the app to a Facebook friend in a different group.

The 10-person company was founded in February 2012 in Tel Aviv by Elkayam, Eilon Tirosh, and Boaz Adato. In May, it took in $1.5 million in seed funding from Blumberg Capital and other private investors. Today, the R&D continues in Israel, but there’s a small office in New York.

To try Moment.me for yourself, you can download it here in iTunes.