Last week it was revealed that personal data management app Evernote would be integrating Skitch — the image-editing app it acquired last year that has now seen 10 million downloads — further into its service, grandfathering Skitch.com in the process. Today, the company showed off what that will mean, with the launch of Skitch 2.o, with new features like pixelation, instant integration with your existing Evernote account, and, for the first time, availability on iPhone and iPod touch. (That also puts it in closer quarters with Snapseed, the iPhone-based image editing app bought earlier this week by Google.)

Evernote says this is part of a bigger push to make the app available on multiple platforms, something that Evernote itself aspires to achieve with its own personal information management platform — although some platforms are clearly proving to be more popular than others. Skitch had already been available as a Mac and iPad app. Putting Skitch in line with Evernote itself, expect versions for Android, Windows Phone and more coming up.

The look. Evernote’s done away with the old interface of the app, effectively giving users one set of tools instead of two, with the new ones pared down into shapes, colors and options that have been those most-used by existing customers. Part of the reason for this may have also been because now that the app is going to be used on smaller screens, the interface needs to be more simplified. Evernote refers to this in a blog post on the new design as “restraint.”

New features. One of the coolest features, and a surprise, really that it wasn’t there before, is the ability to pixelate images, an essential tool for obscuring personal information in documents and sort-of hiding unwanted details in photos (see picture below). There’s also now a highlighting tool in addition to the drawing and boxing tools that existed in the previous version.

Evermore Evernote features. It’s also giving the new Skitch a much stronger integration with Evernote’s other features, some standard and some new ones. On the more basic side, whatever you edit on one device will automatically be accessible on another, and that will extend to the ability to edit files across those different devices. That is now getting augmented with the ability to share to Twitter and Facebook directly. In terms of new features, Evernote is also making your Skitch sketches more searchable: they can now be found using image recognition techniques but also by handwriting in the images, perhaps a sign of some of the technology from Penultimate (another Evernote acquisition) coming into play.

The app is now, more than before, also being used as a lever to encourage more Evernote signups (account numbers are currently pushing 40 million): Evernote points out that users won’t be required to have Evernote accounts to use Skitch, but without it they won’t get all the full monty of synchronizing, sharing and search features. 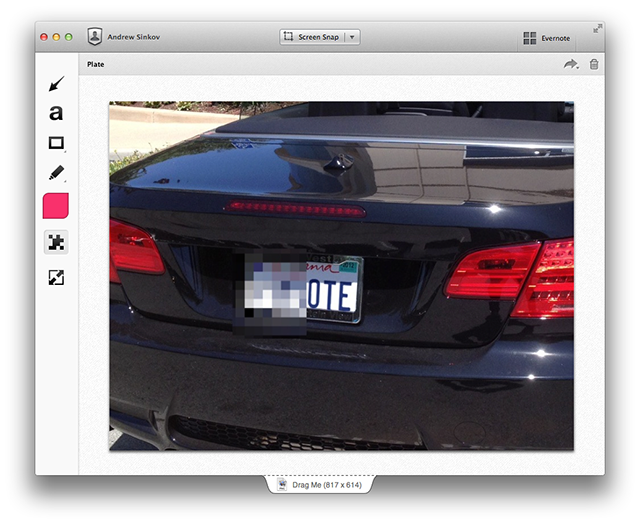 Evernote’s also posted a video sketch to take you through the new Skitch.