Parking Panda, the startup that lets individuals rent out their unused parking spaces and allows garages to discount their lots during slow periods, is now available as a mobile application. The app currently supports a parking finder function in 25 cities, plus parking rentals in the service’s early markets of Baltimore and Washington D.C., as well as new additions San Francisco and Oakland. Using the mobile interface, drivers looking for a space can quickly pull up a list of nearby parking locations. (Hopefully, after having pulled over first!). Homeowners can also use the app to list their spaces’ availability, set prices, and approve rental requests.

As of today, the company now offers 20,000+ parking spots across its three live markets (Baltimore, D.C., and the Bay Area). CEO Nick Miller tells me that his company now has deals with around seven to 10 different garages with close to 75 locations. However, as noted above, Parking Panda is now also providing hours, address, and pricing info for a total of 25 cities across the U.S., so as to provide value to the markets where it hasn’t yet gone live. Launches on the horizon include Philadelphia, Boston, and Austin, followed by another west coast city, and we’ll see the first of those coming online in the next couple of months. 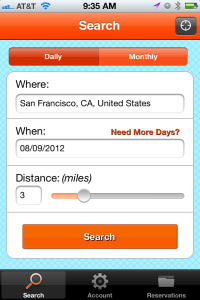 In the Bay Area, where Parking Panda launches today, it’s offering 5,000 to 10,000 spots, and had previously signed up 200 homeowners on its wait list. In terms of garages, it has deals here with Ace Parking and Towne Park.

Although the driveway rentals side of the business (the peer-to-peer model) puts Parking Panda in the “Airbnb for cars” category, a good chunk of its business continues to come from working with garage owners in major cities. When the app first launched into beta in Baltimore, it was during football season, and saw around 70 percent of its bookings on the so-called “collaborative consumption” model where individuals were renting out their own spaces. After the season ended, individual rentals dropped to 15-20 percent of the company’s total bookings.

“I think the private, peer-to-peer side of the business will be bigger in San Francisco than it is in other cities, because there are more early adopters and people inclined to do something like this,” says Miller. “Plus, there are neighborhoods in San Francisco that lend themselves nicely to this.” However, he says that prior to today’s launch, P2P rentals have only been accounting for 20-25 percent of the overall business. “The garage side scales up more quickly,” Miller explains, “and with the garages, you’ll have some number of spaces available every day.” Still, he expects the distribution between garages and P2P to become more balanced over time, as Parking Panda expands further.

While the company doesn’t yet offer details on revenue, Miller did say that he recently wrote a check to a single garage for over $10,000 for rentals that took place during the Baltimore Grand Prix.