Kabbage, which provides working capital to online merchants, has raised $30 million in Series C financing led by Thomvest Ventures, the venture capital arm of Peter Thomson, the founder and managing director of Thomvest Ventures and a director of Thomson Reuters. UPS Strategic Enterprise Fund, Mohr Davidow Ventures, BlueRun Ventures, Warren Stephens, and David Bonderman participated in the round. In addition, SV Angel also recently invested in the company. Kabbage has received a total of $56 million in funding to date.

The Atlanta-based company is essentially a way for online merchants and sellers on marketplaces like eBay, Etsy, and Amazon to get capital they otherwise wouldn’t qualify for at a bank. Many small businesses and online merchants can’t receive financing from traditional banks and don’t want to risk using personal assets like a house to qualify for business loans. Kabbage is disrupting this space by providing a painless way to help these sellers access cash quickly and easily.

Kabbage uses dosens of data sources to determine seller business performance, and provides funding to businesses in fewer than seven minutes. In fact, the startup has been granted several patents for its data-crunching technology.

In terms of data analysis, Kabbage will analyze online merchants’ sales and credit history; customer traffic and reviews; and prices and inventory compared to competitors. And merchants can proactively add information to their Kabbage accounts to immediately increase their access to capital. Most recently, Kabbage started using UPS shipping data from merchants, including volume and transactional information, to decide whether a merchant qualifies for working capital.

Kabbage makes money off of fees charged to merchants for the working capital. Fees depend on how long the online merchant keeps the capital (six months maximum) and the customer’s repayment risk. Rates range from 2 percent to 7 percent of the original advance amount depending on monthly revenue and credit quality. Kabbage currently supports merchants that use eBay, Amazon, Yahoo, Etsy, Shopify, Magento, and PayPal.

Co-founder Marc Gorlin said the company wasn’t looking to raise, but received a tremendous amount of inbound requests from investors. Gorlin says that while Kabbage is focused exclusively on small businesses, the startup supports a wide range of merchants from those who are doing $50,000 in sales in a year to those who are seeing tens of millions in yearly revenue. The maximum in working capital that Kabbage extends is just north of $100,000.

The startup, which is currently only available in the U.S., has grown fairly rapidly since launch two years ago and now fuels more than $800 million in annual sales for its small-business customers. Kabbage customers also take an average of 10 advances per year to help them grow. 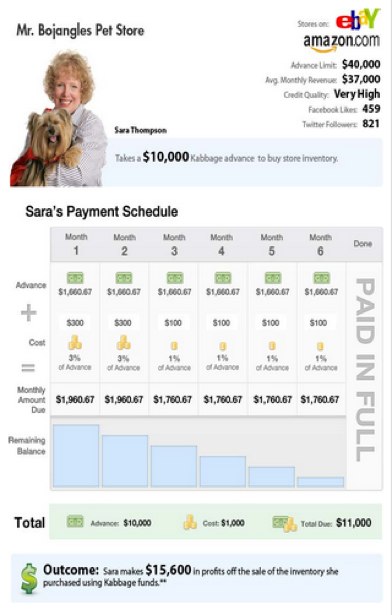 As for the funding, Gorlin says that the plans are to use the new capital to go into international markets. Kabbage will launch a lending service in the UK later this year. The company is also finding new ways to get data on both the online and offline merchant.

“We want the Kabbage score to become more important than the credit score,” Gorlin explains. “We need to understand payroll, accounting, QuickBooks data. We’re more of a data and technology platform and less of a financing business.”

Of course, Kabbage has competition in the lending market. Amazon recently entered the market with its version of Kabbage for Amazon merchants selling through the marketplace. On Deck and Capital Access Network also are playing in a similar space. But Gorlin maintains that the competition validates the space.

It’s certainly interesting to see how new forms of data can be analyzed to revolutionize the lending space for merchants and small businesses. And this is just the beginning — we’re going to see more and more startups and companies use data in the financial world.