Cloze, the startup that helps users score their relationships, is expanding its features today — it’s now incorporating data from social networks and sorting updates from those social networks based on importance.

Cloze previously scored your relationships based on factors like the frequency, promptness, and length of emails, and gave you a prioritized view of your emails based on those scores. In other words, Cloze highlights the emails that come from people who, presumably, really matter to you. It works for both personal and professional connections, though the company’s ideal customers are the ones who work in sales, business development, and other areas that require you to spend a lot of time “outside the four walls” of your company (as co-founders Alex Coté and Dan Foody put it when the company launched).

Over the past few months, users have been asking Cloze to expand beyond email, Coté says — until now, Cloze only used social networks for “contacts and enrichment (like pictures).” And yet, Coté points out that on an average day, he’s probably getting 10 times as many social network updates as emails. I’ve definitely had similar issues, where the 20 most recent tweets in my Twitter stream may come from random people I follow, while a close friend or important business contact shared an update that was totally buried. 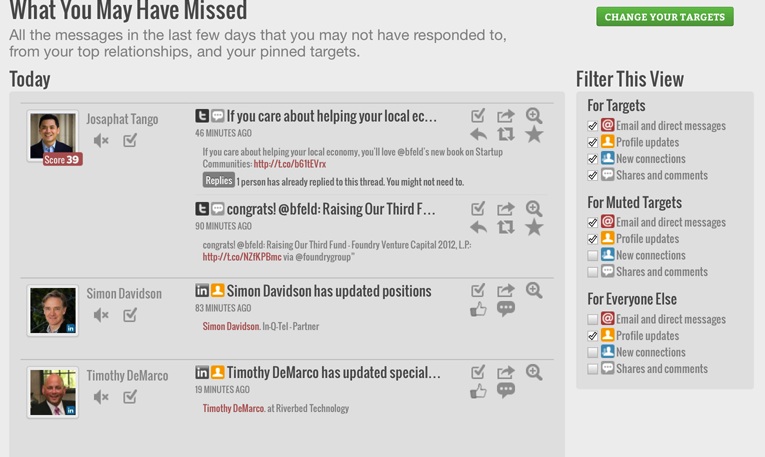 So Cloze now incorporates updates from Facebook, Twitter, and LinkedIn into your Cloze score. And it’s also adding updates from those sites into its dashboard of content, so you can see important emails and social network content all in one place. You can also filter the dashboard by connection and content type (you probably care more about emails and direct messages than you do about random new connections, and you probably want to see more content from people you’re actually trying to sell to). You can respond or “like” a message directly from Cloze.

Cloze is also moving out of the “invite only” phase, so anyone can now go to the site and sign up.