Bookmarking things is one of those quiet, thoughtless interactions with content that probably peppers your days without you even being aware of it. Did you just discover an awesome recipe for tabbouleh? Cmd (or Ctrl) + D that thing. Does some newly-found bit of literary criticism seem tailor-made for your English Lit class? You know what to do.

New York-based startup Annotary takes this momentary interaction and expands on it just a bit — in addition to saving the page you’ve landed on, it allows you to save snippets of outstanding text to go with it.

I randomly struck up a conversation with Annotary co-founder Ashok Nayar at Disrupt SF, where he told me of the sorts of problems that he and partner Travis Hardman created Annotary to combat. Too often people earmark content around the web only to forget exactly why it is they did so in the first place. God knows I’ve been there — my memory ain’t quite what it used to be, perhaps due in part to a general trend of externalizing knowledge — but the team wants Annotary to help fill in those gaps.

Of course, for this to be any good, the process has to be near-frictionless; significantly altering the normally dead-simple process could bring any bookmarking service to its knees. Here’s how Annotary fares: once you’ve created an account and installed the browser plugin, a small black bar will begin to hover in the right side of your browser window. It takes two clicks to effectively bookmark a page (three, if you want to add or change the category it’s saved to), and one more to begin highlighting whatever particularly riveting snippets of text you find. Whether or not it’s worth the extra effort is up to you, but I quickly found that the service’s usefulness far outweighs the few extra seconds needed to make it work. 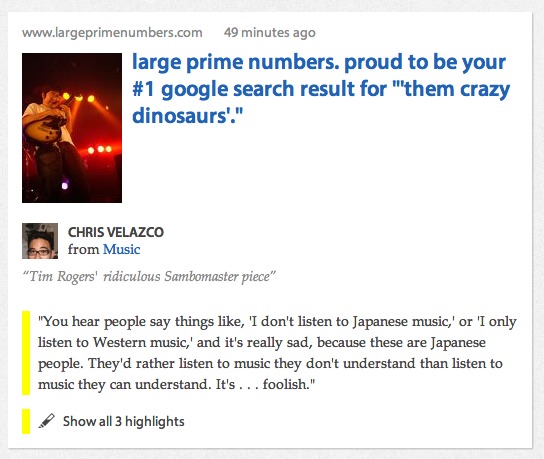 The core idea may seem old hat (companies like Snip.it and Clipboard do similar things), but it’s only after you save a few snippets to your account that its utility really starts to sink in. Unlike those other services, Annotary is geared specifically toward text, and what really struck a word nerd like me is just how often I end up using the thing — much like my brain has been wired to hit my browser’s Read Later button whenever I find some neat longform piece, I now almost instinctually highlight and tag my favorite turns of phrase just so I can go back and marvel at them when I have a spare moment.

The biggest sticking point for me is that snippets of text are organized alphabetically instead of by where they appear in the piece as a whole, but that’s hardly a dealbreaker and the service is still very young (Hardman and Nayar told me they cobbled it together in just two months out of an apartment in the East Village).

As is almost always the case these days, there’s a strong social component here, too. All of your bookmarks (and their related annotations) are pushed into the Annotary site’s main feed for all to scour — something that can’t be changed, for better or worse — and it’s simple enough to start following users who have similar tastes in content.

Sharing your collections of pages and notes via Facebook, Twitter, and the like is dead-simple too, and part of Annotary’s appeal is that you don’t need to be a registered user to get some functionality out of it. On the off-chance you want to share your collection of inspirational sport quotes (or whatever) with non-users, they’ll be able to see all of the saved pages and all of their highlights and notes without having to sign up first.

Is this going to be for everyone? Hardly — Annotary’s (strictly enforced) inability to play nice with images and video will certainly limit the sorts of users it’ll get, but Nayar and Hardman aren’t worried. By keeping the service text-only, they hope that the users they do get will be more invested in it; in Nayar’s words, those users will “curate what’s emotionally relevant to them.” Will the approach pan out? Tough to say at this point, but Annotary is simple, and works like a charm. That’s good enough for me.