Back in May, TalentBin (formerly Honestly.com) launched a people search engine for recruiters. Now it’s releasing that search engine in iPhone app form, aimed at a different audience — not recruiters, but pretty much anyone who’s ever wanted to look up someone else.

The underlying data in the search engine is pretty much the same, with profile information and activity aggregated from social networks like Facebook, Twitter, LinkedIn, Google+, and Quora (data that CEO Peter Kazanjy has called “professional exhaust“). But just by moving the search onto a mobile phone, Kazanjy says the use case changes, which is why the app is called Lookup, not TalentBin.

A recruiter probably isn’t looking up their targets on their phones (unless they’re super-hardcore?), but what if you’re on your way to a meeting and need some basic context about who you’ll be talking to? (An opening gambit I rely on far too often: “So … what do you do again?”) Or if you just met someone at an event (say, TechCrunch Disrupt) and again, want to figure out who they are and what they do.

Of course, you could always just Google them, but then the relevant information is probably spread out across a bunch of different profiles. Kazanjy argues that existing search engines are “document centric,” whereas TalentBin/Lookup is “people centric.” So the app summarizes the major points across all those profiles (though you can also look at each profile individually if you want), lists likely interests, and lets you look at their social network activity by interest. In the screenshot below, for example, you can see a bunch of Apple-related activity from TechCrunch alumnus MG Siegler.

While demonstrating the Lookup app, Kazanjy also showed me a new feature in TalentBin, which now shows you all of the patents where a given user is listed as the inventor. That’s not available in Lookup yet, and probably isn’t as useful in a casual, mobile context (unless you’re weirdly fascinated by patents), but it does point to some ways that TalentBin is expanding beyond social network-type activity. 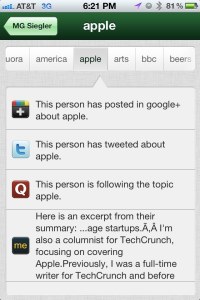