Google launched Chrome for iOS in June. By mid-July, Google’s browser for Apple’s mobile operating system had managed to get about 1.5% of the market and has been adding new users ever since, despite the fact that Apple makes it very hard for its users to switch browsers. Now, according to the latest data from online advertising service Chitika, Chrome for iOS drives 2.7% of all iOS web traffic to the sites in its network. Depending on the hour of the day, says Chitika, traffic from Chrome for iOS is often above 5% and peaked at 6.83% on September 7.

Obviously, Chrome for iOS is not a huge hit and Chitika’s analysts note that “considering the fact that Chrome for iOS spent nearly a month as the top free app for iOS devices, the Chitika Insights team expected it would make more of an impact on the market than it has thus far.” 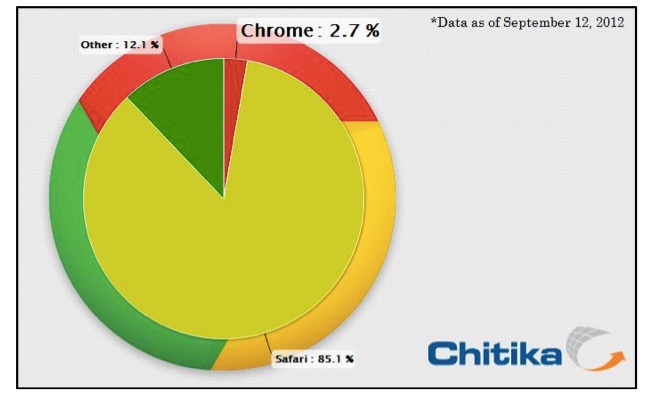 One thing Google has going for it in terms of getting a bit more market share is that it recently added an “open in Chrome” feature to its Gmail and Google+ apps for iOS. Other apps, including the now Google-owned Sparrow for iPhone offer a similar feature.