Based upon work first done at MIT, the service is offered through the company’s Veritable API, which the company says is designed to make applications smarter. The technology uses state of the art machine learning behind the scenes to handle the complexity for real world data.

It’s obvious that we are in the data age. There is plenty of data – too much for us to use, really. But if data is plentiful, then the people who know how to use it are scarce. 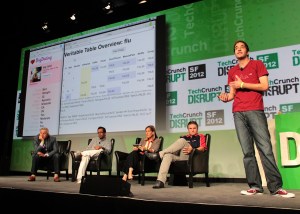 “There are just not enough of them,” said CEO Eric Jonas about the data science community. “McKinsey estimates we will be 200,000 short in next few years. There are only so many super nerds out there.”

Using data is a messy task. It’s an issue of semantics. When thinking of a person – how do you quantify that person’s data? How do you measure their height – by inches or by centimeters?

The Prior Knowledge team have spent years learning the art of statistics. What they say they have done is build that knowledge into the software. The knowledge built into the Veritable API allows developers to build apps that can determine what something is by looking at it as a whole. It does this by looking at the causal relationships in data. For example, Prior Knowledge worked with a retailer to determine customer purchasing patterns.

The service helps “magically fill in values,” that may be missing, Jonas said in his presentation today. For instance, a dating site may be missing values about the people that have signed up for the service. “What we are really doing is disrupting blanks.”

The added benefit is in how much Prior Knowledge has abstracted the complexity of doing such complex analysis. You don’t need to have a deep understanding of linear regression analysis. Instead, developers need to know the basics of traditional databases to use the service.

Here’s an example of how Prior Knowledge can use the service to help predict customer behavior:

Jonas says the Prior Knowledge focus is pretty universal.

“We are opening to the world,” he said. “We are trying to get as many possible people across different verticals.”

Prior Knowledge is one of those technologies that can do so much that it is hard to find a place to start. That’s the challenge the company faces in the overall market, especially as it competes with business intelligence companies that are also developing predictive analytics technology.