As Eric Ries pointed out in a TechCrunch post last year, although many may be familiar with “A/B testing” as a direct marketing technique (what it was initially developed for), it can be an even more powerful tool when used in product development.

Of course, while A/B testing has long been an integral part of web development, for native mobile apps, utilizing the process to test new designs and updates is a bit trickier. Because of Apple’s approval process, it can take weeks for developers to push out an update and for users to download that update. So Pathmapp, a startup launching today at TechCrunch Disrupt SF, wants to change that by giving mobile developers the ability to test updates and push them live in realtime — just by implementing one line of code.

But the startup isn’t just limiting its scope to A/B testing, it wants to breathe new life into mobile analytics, too. Pathmapp co-founder and CEO Adam Ceresko tells us that the need for optimization tools among developers today is high, and mobile analytics have become one of the fastest-growing spaces (and market opportunities) out there.

While companies like Flurry, MixPanel and Google have been playing in the mobile analytics space since the beginning — and companies like Y Combinator grad Optimizely offer developers the ability to A/B test their websites — no one has yet adequately addressed this demand by combining visual analytics and A/B testing for mobile. 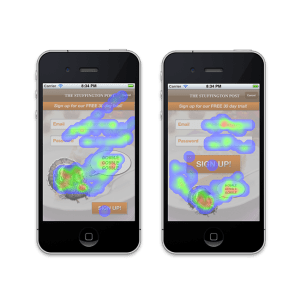 Once a developer embeds Pathmapp’s technology (in one line of code), it begins collecting every interaction (touch, swipe, etc.) undergone by the app’s users. The startup then curates this user data, offering “Heatmapps” — i.e. visual density maps — that indicate exactly where users are interacting with the app the most, on every screen. The platform also offers visual representations (“Pathmapps”) of the most common paths through the app, as well as crash reporting. So, in addition to log dumps, Pathmapp can show where users clicked right before the app crashed.

Ceresko says that the idea for Pathmapp grew out of his experience founding APPEK, a for-hire mobile app agency — and the parent company of Pathmapp. After three years helping to design and deploy Android, iOS and Facebook apps for businesses and indie developers, the CEO said that the frustration with the lack of solid mobile A/B testing tools (and visual analytics) became too great, so the team decided to re-focus on building its own platform. [APPEK itself is also a Disrupt Startup Alley veteran, and TC has previously covered its adaptation of Space Invaders for Facebook.]

Going forward, the startup plans to institute a freemium pricing and business model, as it hopes to create a tool that allows both indie developers and Fortune 500 companies to effectively optimize their mobile app conversion. One setup we could see in the future is the startup offering its “Heatmapps” feature for free to (visually) draw users into the platform and up-selling clients with Pathmapps, crash reporting and A/B testing offered via monthly subscription. 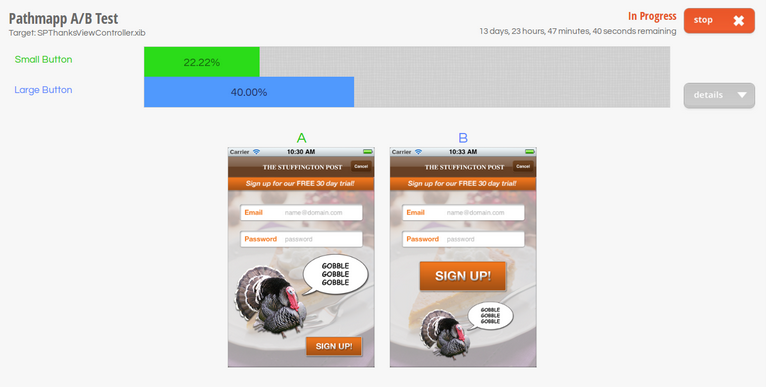 Pathmapp will also look to leverage APPEK’s past and present clients to test the platform and become its first users and is also moving to partner with agencies with more substantial reach. As of now, the startup has Carrot Creative on board as well as one other big name, which the company can’t share as of yet but will give the company some big-brand legitimacy to help spread the word.

The company is offering a unique answer to the tangle of analytics data out there and by letting developers drill down into the user trends and stories that make up its visual presentations, Pathmapp could have some serious appeal for mobile developers. The simple installation process definitely helps.

Unfortunately for Android fans, Pathmapp is only supporting iOS out of the gate, but Ceresko says that Android support will follow very soon.

More on the startup at home here.

Questions From The Panel of Judges

Tony Conrad (True Ventures): How are you acquiring users? How do you build the front of the funnel? How do you get them to the front door?

A: We’re looking to game some heavy hitter clients thru inside sales, looking to build partnerships w/ brands, that would be a homerun. i want to make this developer-friendly, come in thru the backdoor for developers and attract brands. we also have an established mobile dev company, which will help us with our footprint.

A: Being able to do A/B testing in realtime on mobile, as well as solving the problem of waiting for Apple to approve updates in iOS.