We’ve all been there before. You’re on a phone call or video chat when someone brings up a topic you’re unfamiliar with. What are your options? You either lie about knowing what the other person is talking about or you scramble to Google or Wikipedia and search on whatever the topic might be. It happens all the time.

Wouldn’t it be easier if there were a piece of software that could analyze your conversations in real time and pull pertinent information so you’re always in the know? Of course, which is why Expect Labs’ MindMeld iPad app has the potential to advance natural-language recognition and push the envelope where Google, Microsoft, and Apple have failed so far.

Tim Tuttle, founder and CEO of Expect Labs, recently gave me a demo of the voice-only MindMeld app in a crowded room, and it worked surprisingly well.

“Our application analyzes and understands the last 10 minutes of your conversation to predict the information you may need in the next 10 seconds,” Tuttle told me. “We call this ‘continuous predictive modeling,’ and in some cases, it can find relevant information as you talk before you even need to ask for it.”

What’s that old adage about learning to walk before you can run? Yeah, that. When the voice-only iPad app launches next month, it will support up to eight people, but it won’t yet be ready to predict what might come up during your conversations. For now, the app will retrieve information based on your conversation that you trigger within the app as topics of interest come up. It will also pull in Facebook information when users sign up for the service. Other services like LinkedIn will eventually be integrated as well. 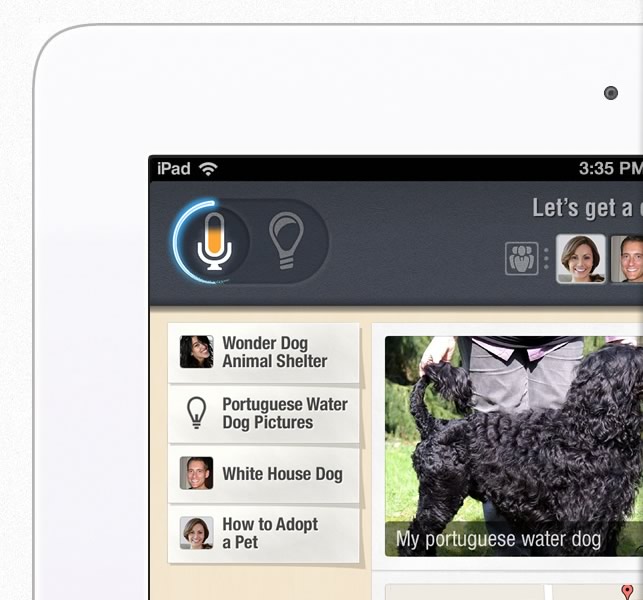 So, for instance, let’s say you’re having a chat with your significant other about where to go to dinner and he or she mentions a particular restaurant that just popped up on whatever popular food blog he or she reads. By tapping the light-bulb icon, MindMeld serves up articles about that restaurant for you to peruse while you’re chatting, or it will let you save it to a clipboard that can be retrieved at a later time. MindMeld does not cache your conversations, just the clips that you’ve proactively saved. 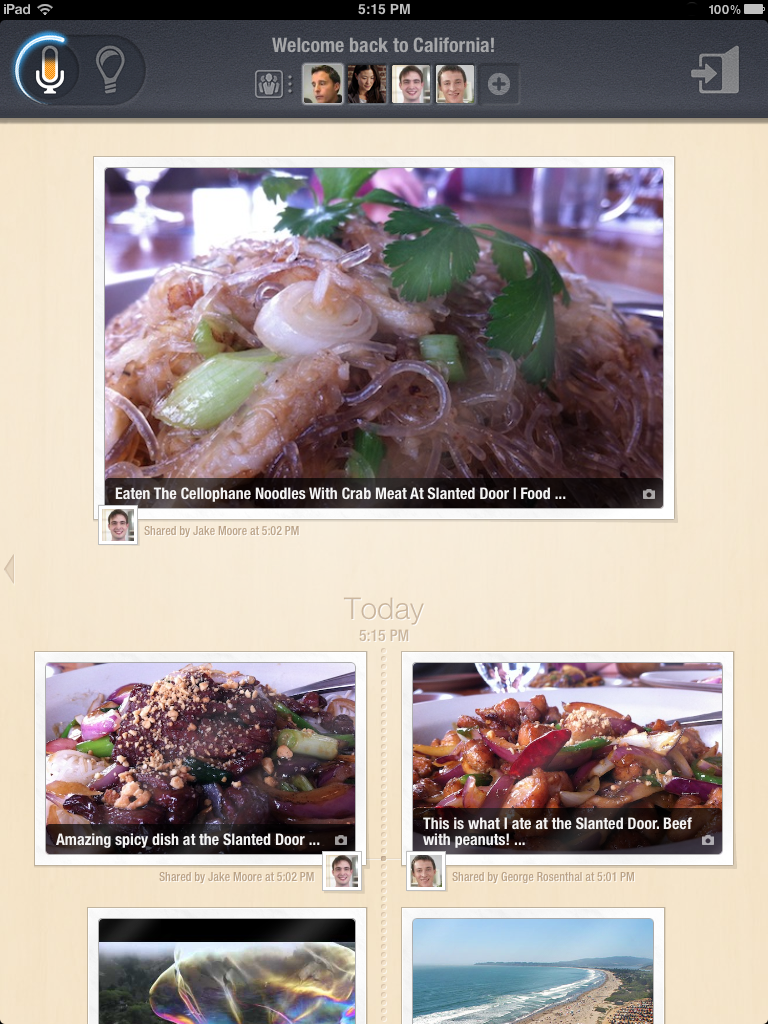 While the whole idea of MindMeld sounds ambitious, it’s actually not given the team’s pedigree. Half of the team (total of eight) is comprised of researchers from MIT and Carnegie Mellon. And this isn’t Tuttle’s first time at the voice-recognition rodeo either. Tuttle’s last startup, Truveo, which analyzed and indexed audio and video without much metadata, was sold to AOL in 2006. He and his team have been working on the core technology driving MindMeld for the last two years.

“Our core technology goes beyond Skype meets Siri or simple search. It’s a real-time map of your conversations allowing us to then predict what might be relevant in the future,” says Tuttle.

The potential for what Tuttle calls “anticipatory computing” is a treasure trove of wealth (both technologically and financially) but the team needs to test the current version at scale before unlocking any new features. While Tuttle was coy about the underlying voice recognition technology, he did say they’re working with “top-tier services” but that Expect is layering their own secret sauce on top of those to power conversations.

“Our underlying technology platform is designed to make it possible to automatically find related information during any conversation. This includes not only voice or video calls, but it also includes web conferences, business meetings, call center applications, etc.,” remarked Tuttle. “There are numerous enterprise applications that could benefit from our technology, including customer support, sales calls, and online learning. Early next year, we will open our platform to third-party developers so they can build solutions like these using our underlying technology.”

MindMeld won’t always be an iPad app, though. The company says they plan to roll out across iOS (read: iPhone), Android, and web browsers some time later this year or early next year. Pricing hasn’t yet been set for the upcoming iPad app, but it will be “nominally” priced. I’d guess $1.99.