Facebook’s purchase of Instagram finally closed today, and here’s what we think happens next. Instagram‘s founders will work at Facebook for a while but some of their team may soon leave for another startup adventure. Meanwhile on the product integration front, Instagram could gain Facebook login and the ability to tag Facebook friends in photos, and Facebook could offer a bulk import option to create an album of all your Instagram photos. Eventually Facebook may even start to monetize it with some sort of Sponsored Photos in the Instagram feed.

Should I Stay Or Should I Go? 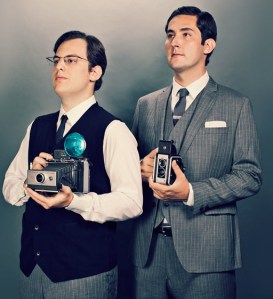 It’s unclear whether the stock portion of the acquisition price was paid out all up front, or whether Instagram team members will vest over time. Given that the deal with negotiated so quickly, Instagram founder and CEO Kevin Systrom likely aimed to get as much for him and his team as soon as the deal closed.

Either way, major share holders Systrom and Mike Krieger (from right to left in this portrait by Cody Pickens) are likely to work at Facebook for the foreseeable future.

Their golden handcuffs may be too valuable to shrug off, and even if they already got their loot, they’ll want to make sure their baby prospers under the Facebook flag. In his Facebook post about the closed deal, Systrom explained “‘I”m psyched for the next chapter of this long journey. I want to personally thank everyone in the Instagram community for the last two years of inspiration. Here’s to the next two as well!”

How long the rest of their team who were hired much later in Instagram’s life cycle will stay is a different question.

We’ve heard some of the teammates had joined and rejected lucrative offers from other startups on the premise that they’d be trying to take Instagram as far as it could go. They may have felt somewhat slighted by the possibly premature sell out. Also, having been attracted to a lean, risky early stage company, they may not be too keen about working for Mark Zuckerberg’s juggernaut. Some may leave after one or two years in search of another wild ride.

Exactly how long may depend on just how much Facebook lives up to its promise to continue running Instagram independently. More meddling may lead to shorter stays be teammates. If Instagram continues to feel like a self-directed startup, they may stick around. 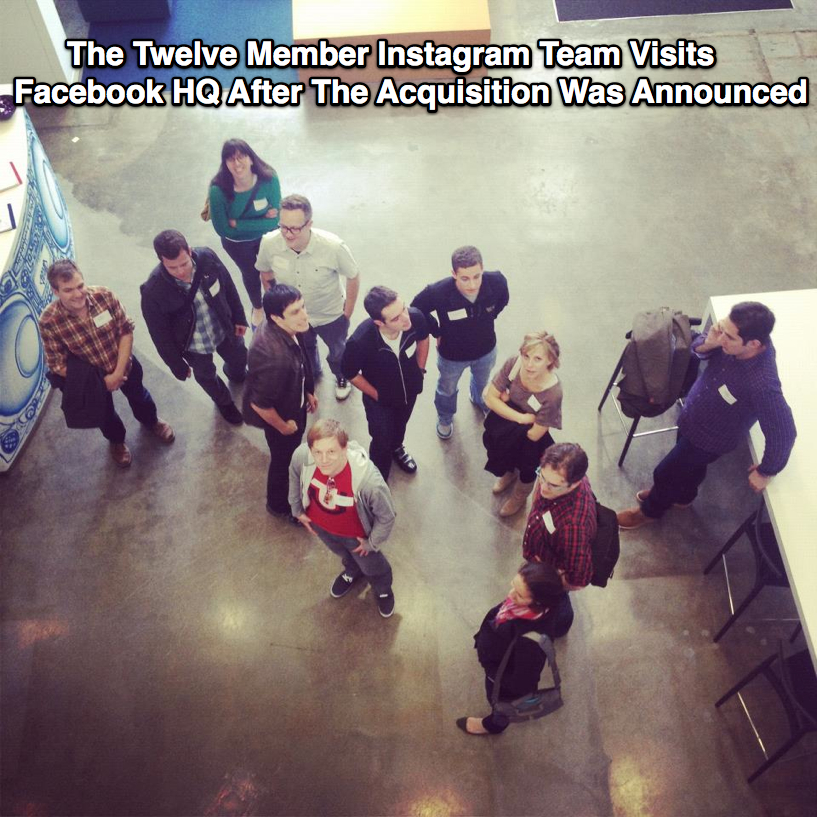 The First Wave Of Facestagram

Instagram and Facebook couldn’t begin formal integration until the deal closed, but now the bridges can be built. Here’s what we see as the most likely early developments:

Right now the only way to share Instagrams to Facebook is one at a time. The two companies might introduce a bulk sharing option where you could instantly add all or any selected Instagrams to an “Instagram Photos”. If you’ve already shared individual Instagrams, automatically creating the album, any missing shots could be quickly added.

In the other direction, Instagram may begin allowing you to select to filter an publish photos you’ve already uploaded to Facebook, rather than just from your camera roll. This would let you Instagram photos taken on traditional cameras, or that you posted to Facebook before joining Instagram (or before the photo app even existed).

Currently you can @mention Instagram friends in your Instagram posts but you can’t actually tag them in the photos. Plus @mentions of Facebook friends on Instagram don’t translate into linked mentions or tags on Facebook. Those missing tags are critical to Facebook, as they let it display the photo on multiple timelines, generate notifications that drive return visits from those pictured, and give it a better sense of who to show a photo to in the news feed.

Facebook recently released an API feature that syncs @mention tags in third-party apps to Facebook user profiles so they appear as full fledged tags on Facebook. Activating this for Instagram would be an easy and logical step. A deeper integration would allow you to actually tag Facebook friends in an Instagram, not just mention them in the caption. 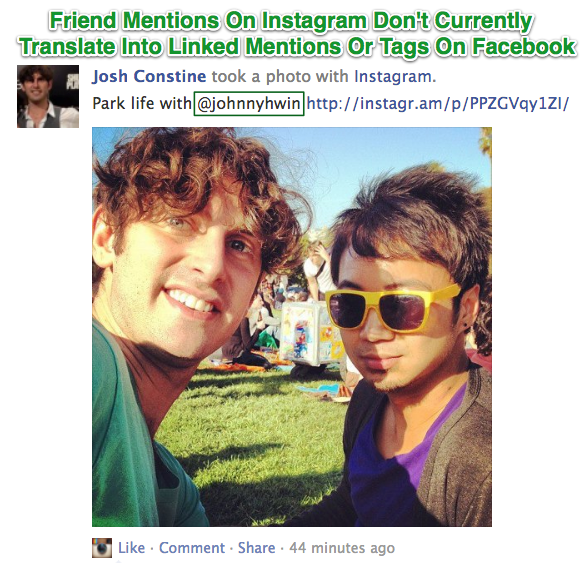 Right now, Instagram doesn’t earn any significant revenue. Facebook bought it to kill a competitor in the cradle and take advantage of its user, not to make money right away. Still, as a public company that might bring heat on Facebook, though it shouldn’t care too much what the myopic public market thinks. Instagram is still growing at a brisk pace and ads could bog that down, but when it starts to decelerate, Facebook might seeks to squeeze some dollars out of it.

Considering Instagram is nothing but a feed, that’s where the ads would have to go. I imagine Facebook lending Instagram some sales team resources and it selling brands glossy photo ads injected into the stream. Imagine a slick filtered pic of Nike’s new shoes and an option to follow Nike on Instagram. More aggressively it could link ads out to ecommerce or brand websites.