Bing has a bit of an image problem and despite its best efforts, Microsoft claims, many people still have the perception that Google is simply “better.” To combat this, the company is launching its Bing It On challenge today. The challenge is essentially a Pepsi Challenge for search results. Microsoft says that in these blind tests, “people preferred Bing web search results nearly 2:1 over Google in blind comparison tests.” It’s worth noting that Microsoft excludes ads and features like Bing’s Snapshot and Social Search panes and Google’s Instant Previews and Knowledge Graph boxes from this comparison.

In the Bing It On challenge, you get to enter five search queries and the results are then presented side-by-side. You choose a winner for each result (or declare a draw) and once you complete your five queries, you get the results, which you can then share on all the major social networks. 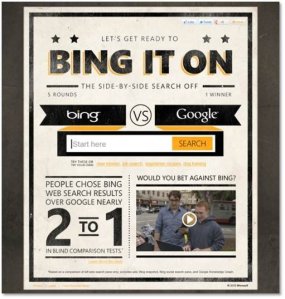 According to the Bing team, its mission right now “is to show people it’s time to break the “Google habit” and that Bing has reached a quality level that will make it easy to switch.” Bing today, says Microsoft, has greatly improved the quality of its search results over the last few months. ” It’s long past time in our industry for a conversation on search quality,” says Harry Shum, Microsoft’s corporate vice president for Bing R&D in a blog post today.

To get the word out about its new campaign, Microsoft is rolling out a new nationwide TV ad campaign as well. The campaign looks somewhat similar to the Smoked By Windows Phone campaign where mobile phone users had to best Windows Phone at performing certain tasks on their iPhone and Android devices. Here is the first video in this new campaign: