With social networking having permeated the way we look for jobs, share photos and music, and discover news, a startup named Lore is on a mission to do the same for higher education, and potentially re-shape the way teachers and students communicate. Formerly known as CourseKit, the Thiel and Founder’s Fund-backed startup is doing that with a platform that is part Facebook and part Blackboard — for courses. In other words, Lore aims to act as a replacement for the infamous course management system with a gradebook, calendar and document uploading (for class assignments), while giving students a social network-style newsfeed for classroom conversations.

However, until now, Lore has been primarily focused on creating functional communities around courses, and students could only join Lore if a teacher invited them. While courses are remaining the central axis of the network, the startup has launched “Lore For Students,” which now lets students join themselves and create academic profiles, follow classmates and professors and join groups (like study sessions or clubs).

The network logged its first semester live this past spring, with professors at over 600 schools testing its framework. Co-founder Joseph Cohen tells us that, since July, thousands of coures across a range of disciplines have joined, from “Experimental Poetry” at UPenn to “Organizing For Power” at Harvard — with an average of more than one course per school on board.

In July, the startup launched an end-to-end redesign of its network. Taking feedback it received over the course of the spring, it combined pre-existing features like “Stream” and “Calendar” into a Facebook-inspired Timeline, or newsfeed. 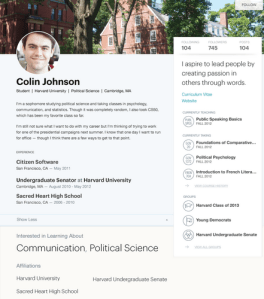 The newsfeed allows teachers to make classroom conversations public by default, instead of relying on back-and-forth group emails. It also added a feature which lets students audit classes and academic profiles, in which students could share education, experience, honors and awards, courses, groups, CV, etc.

In terms of who’s using it? Cohen said that the most eager to adopt have been teachers who want to engage with students on a medium they’re more familiar with, as well as among those who create close relationships with individual students. It gives them the ability to stay in touch with students after the course ends — or even after graduation.

In comparison, Lore For Students, which launched in time for the new school year, gives college students the ability to create a learning profile to enable them to share what they’ve learned, what they’re studying and what they want to do after school, join class communities, academic groups and use real-time messaging to contact anyone in their network.

With 600+ schools on board, Lore has been able to build strong organic growth, without relying on paid user acquisition. However, while hundreds of institutions may be on the network, only one or two classes per school may be involved, so it’s got a long way to go before reaching critical mass. So, in an attempt to bring the whole school online, the team is starting with a targeted group of four schools and working with a team of students at those schools to push the envelope. And like other networks before it, the plan is to restrict access for schools until a certain number of students have joined — and worry about monetization once enough schools (and students) are using the network. 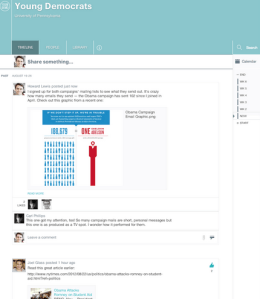 Sounds a bit like Facebook, which raises the question: Why wouldn’t students and teachers just use the omnipresent social network? That’s because context is key for social networks, Cohen says. Students don’t want to “friend” their professors on Facebook (or connect with them on LinkedIn in any significant capacity) and they don’t want to broadcast photos from last night’s party to the world of family members and grandmas on Facebook. Your network for learning is distinct from your social or professional network, so Lore wants to create a community which recognizes that — with a context that’ll make actually want to “follow” your favorite professors.

But why not create a social network for students separate from professors? Lore is betting that there’ll be enough of the experience on its network that doesn’t require professors it won’t stifle communication. And that having professors there gives the network’s learning context some credibility.

The New York-based startup raised $1 million in seed funding back in June of 2011, followed by a $5 million series A in January (led by The Social Capital Partnership). In April, education contrarian-turned-Stanford-professor Peter Thiel joined the startup’s roster of investors (with an undisclosed sum). Thiel said of the newly-rebranded startup: “The Internet is reshaping how people learn, and Lore is one of the companies making that happen. My course at Stanford is using Lore and we can see dynamics changing already.”

There’s no doubt that the right hybrid of social network that can get kids interacting in coursework-related conversations outside the class will have a big impact on education. Whether or not Lore is that tool remains to be seen. But giving students the ability to see a roster of people in their class, click on a face and view that person’s profile, what other courses and groups they’re in and join those — within a newsfeed-style interface they’re familiar with — can’t help but seem like it has a lot of potential.