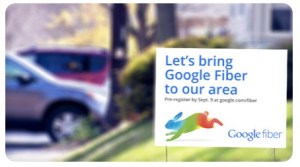 Google plans to build its Fiber service in the neighborhoods that reach the company’s pre-registration goals and the timing of the roll-out will be based on the final rankings. Potential subscribers only have to put down a $10 pre-registration fee and the company is currently waiving its $300 construction fee, too. Google is also offering free Internet service to those who don’t want the fast gigabit connection, though those users will have to pay the $300 construction fee.

It seems like Google itself is a bit nervous about the relatively low sign-up numbers and is currently looking for Google Fiber ambassadors to encourage their neighbors to sign up. The company is also making yard signs and fliers available to those who want to help spread the word about the advantages of a gigabit Internet connection.

Many of the Kansas City areas that haven’t reached their goals yet are low-income neighborhoods where gigabit Internet connections aren’t a priority for most people. These communities, however, are also the ones that would most likely benefit from Google’s plan to offer free connections to schools, libraries and emergency facilities in their neighborhoods and it remains to be seen if Google will connect these buildings despite the fact that the overall neighborhood didn’t reach its goal.