And now there’s HuffPost Labs, which will unveil its first project today: Highlights, a collection of the most popular sentences from articles and blog posts across the Huffington Post empire.

(Disclosure: In case you didn’t know, AOL owns both Huffington Post and TechCrunch.) 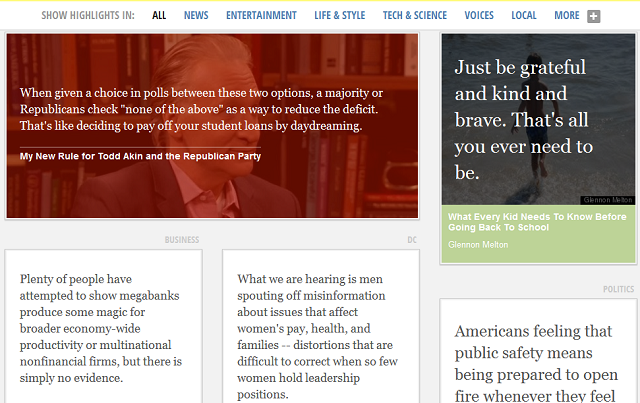 Labs co-founder Conor White Sullivan explains that there are two ways a reader can “vote” for a sentence: either by selecting the text and clicking the new “Highlight” button that will start appearing on Huffing Post today, or by simply copying the selection. The sentences are also judged by the ratio of highlights to page views, since articles and blog posts that are featured on the front page of Huffington Post or AOL.com get more traffic than posts that are deeper in the site’s navigation. So a sentence that received lots of highlights even though it got a relatively small number of page views will be treated as very interesting on the Highlights page. This should help surface interesting stories that might otherwise be overlooked.

Sullivan says that Labs operates like a startup within HuffPo. He explains that when Huffington Post CTO John Pavley wanted to bring the startup mentality with him when joined the company from Spotify earlier this year. Sullivan liked the idea, having come from a startup himself (Localocracy, which sold to Huffington Post last year). He met up with Brandon Diamond, formerly of MongoDB makers 10gen after reading about him in Betabeat’s “Spring 2012 Most Poachable Players in Tech” slideshow. The two hit it off and decided to start HuffPost Labs.

“[Diamond] has the startup attitude of doing projects quickly in eight week sprints and seeing if they work,” Sullivan says. “We have the advantage of being part of the HuffPost ecosystem, with millions of page views so you can see if something works or not. But you can work without being bogged down by corporate bureaucracy.”

Labs is rounded out by another startup veteran, lead designer Andrew Sass, formerly of Unified.

Highlights came out of the team’s desire to solve the information overload problem. “It’s sort of ironic working on this at HuffPost, but no person can read as much content as we’re publishing,” Sullivan says.

They hit on the idea of highlighting sentences because what people choose to copy, whether that’s into an e-mail or into some storage system like Evernote, is much more personal than choosing to share a URL. Also, Sullivan happened to really likes finding news through e-mail lists, where people tend to copy pasta snippets of articles to share with other subscribers.

The team is now working to bring Highlights to other sites. In fact, we’ll be using it here at TechCrunch soon. Sullivan says they’re working on bringing it to other media companies as well, but don’t have any plans of making the functionality available through a public API.

Other than highlights, he says the team built a project during a LinkedIn hackathon that will help non-profits recruit employees and, of course, “a whole bunch of stuff” that he can’t talk about yet.