iZettle, the mobile payments startup that wants to be the Square of Europe, today passed an important milestone: the company says its dongle-based card processing system now works with Android devices. The service is being turned on first in iZettle’s home market of Sweden and is then extending to more countries in early autumn, Jacob de Geer, CEO of iZettle, tells TechCrunch. This makes iZettle, which in June picked up a $31.4 million round of funding, the first company to commercially offer a plug-and-play, mini chip-card dongle for Android, the dominant smartphone platform in the region, accounting some 60% of all devices. Before today, iZettle’s payment platform only worked on iOS-based iPhone smartphones and iPad tablets.

But as iZettle continues to grow its ubiquity on one level, it’s still working on compatability on another: the news comes as iZettle continues to try to find a resolution with Visa Europe, which last month stopped supporting iZettle payments on its network in the region, a move that affects some 15,000 of the 50,000 small merchants already using iZettle. De Geer tells TechCrunch “No news yet” on the progress of their negotiations.

iZettle’s new Android service is the culmination of a trial it started back in July with Samsung, the world’s most most popular Android handset maker at the moment, in iZettle’s home market of Sweden.

The new commercial service, launching first in Sweden, will work with the Samsung Galaxy S II, S II LTE, S III, and the Galaxy Note, with the free app available for download from the Samsung Apps storefront. The dongles can be obtained via iZettle’s website, as well as retail stores operated by mobile 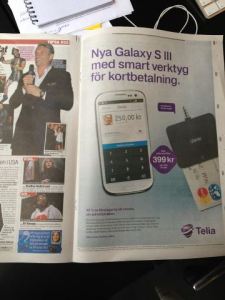 carrier Telia, which is selling them on their own, and bundled with Samsung devices and services plans (a pic of how it is being promoted is shown here).

iZettle says that it’s now working on compatibility for other Android devices, and to extend the service into other regions where it operates. These currently include merchants across Sweden, Denmark, Finland and Norway, as well as an ongoing trial in the UK that will become fully commercial in the “near future.”

Like dongle-based mobile payment services Square and PayPal’s Here, iZettle is focusing on the part of the market that doesn’t already have card-processing services — small merchants. Using services like iZettle, Square and Here, small businesses do not need to sign up with any banks to take payments with cards; it’s just a matter of plug-and-play.

Square’s strategy with small merchants, of course, got massively expanded earlier this month when the company announced a landmark deal with the multinational-cafe chain Starbucks. Square has said that it will use recent funding to help expand its service internationally, and Starbucks, with its 18,000 stores in 60 countries, could be one route to how Square does that. If Square piggy-backs on Starbucks, that could be good news for iZettle, since it might mean less focus on the small merchants who currently are iZettle’s target market.

Unlike Square and Here, which both use a card’s magnetic swipe strip for processing, iZettle has focused on chip-based transactions, which are the dominant format in Europe. Each transaction on MasterCard, Visa (where accepted) and Diners Club is charged a flat 2.75% commission (3.75% for AmEx except in the UK, where it’s a 2.95% commission).

iZettle has plans to extend to more European markets with its solution, but the Visa Europe situation could start to feel even more acute as a result.

When news first broke of Visa and iZettle’s dispute, a Visa Europe spokesperson told us that the issue had to do with iZettle failing to meet Visa’s “standard acceptance device requirements”. TechCrunch understands this involves how cardholders are authenticated: iZettle asks for a signature; Visa Europe requires the use of PIN numbers.

The dispute affects some 15,000 of the 50,000 merchants that are already using iZettle, iZettle CEO Jacob de Geer told TechCrunch, because Sweden did not get included in Visa’s decision, and iZettle never included Visa in its UK trial, possibly because of this situation.