Back in March, Obvious Corporation, the mini accelerator founded by Biz Stone, Ev Williams and early Twitter employee Jason Goldman, announced its second incubation in Branch, a stealth startup co-founded by developers Josh Miller, Cemre Güngöre, and Hursh Agrawal. Branch was — in their words — on a mission “to turn the Internet’s monologues into dialogues.”

The startup also grabbed $2 million from Obvious, Lerer Ventures and SV Angel and moved back to New York City, where it set up shop in Betaworks’ offices, using the capital to put the finishing touches on their product. While the team shared some high level info at the time, it had been unclear just what Branch was cooking, but today the startup is officially emerging from private beta and sending invitations out to the public.

From the startup’s announcement on its blog today:

Today, Branch is coming out of private beta and will begin sending invitations to the public. Our team is so excited to show you what we’re building, but before we do, we want tell you why we’re building it.

We think the internet is an incredible tool. It’s given each of us a voice, and the power to share our voice instantly with millions of people around the world. But gaining the power to talk to the world hasn’t lessened the value of talking to each other. If anything, we think it’s more important than ever.

That’s why we wanted to build a new way to talk to each other, and why we’ve built Branch. Between articles, blog posts, and tweets, the internet is dominated by monologues. So we want to build a home for dialogues online, by combining the intimacy of a dinner table conversation with the power of the Internet.

In essence, this means that Branch is building on and expanding the 140-character world of Twitter, allowing users to pull content from just about anywhere on the Web and start a dialogue about that content and publish it to the world. As the team explains in its post, the service is designed as a way to quiet the noise of communication tools on the Web and focus on what’s important and who you want to include in that discussion.

Like blog posts, the team explains, Branches are public and you can decide who is included in the dialogue and expand on a particular tweet or video, for example, that got your juices flowing. Other users can respond to those comments, share it, or subscribe to that user. It also applies Github’s “forking” to conversations and threads, allowing the “branching” of conversations (by clicking a “Branch this” button), which creates a post next to previous one. This allows users to riff on whatever’s being said without taking the whole conversation off track.

Users can ask questions of their friends, initiate public debates, share media and publish their own ideas. Really, Branch is combining the Facebook status with a bit of Yammer’s curation and information sharing and the comment section model — all within the context of Twitter’s realtime media landscape.

But the problem with Twitter is that in the fast-paced world of ultra-sharing, other than hashtags, conversations on Twitter tend to lack context. Branch seems to be trying to provide users with that context or canvas on which they can find a happy medium between blogging and sharing in 140 characters. To that point, the team has also released a bookmarklet that enables users to import threads from Twitter and expand on them, giving them context and making them easier to process and follow. 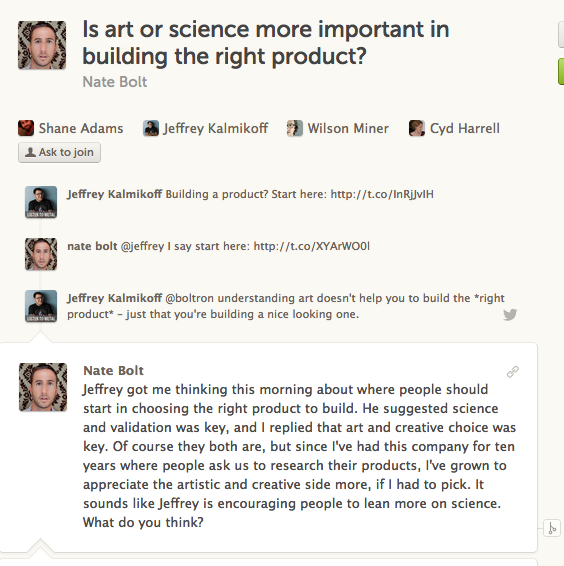 The other nifty feature here is that Branch threads can be embedded in blogs (like WordPress and Tumblr, for example), allowing you to display conversations in context, rather than relying on screenshots of comment sections or sharing the sensitive information (within the professional context) of Yammer.

The design, so far, looks great, and, as with everything else, this will be all about the user experience and how much value it creates for users beyond the world of Twitter sharing, blogging and Facebook. There seems to be plenty of opportunity there to give voice to experts and give space to important conversations happening among people you trust, in a broader way than you might find in a Quora thread. Clearly, Branch thinks there’s room to build and with the backing of the same guys who helped Twitter come to life, you know there’s been a lot of cross-pollination and talk of how this can improve on the Twitter experience.

The rest of Branch’s blog post is below as is its introductory video:

What makes Branch different? First, we value the diverse perspectives the internet gives us access to, but we also know that too many voices can make things noisy. So on Branch, you can pick who you talk to—but, like blog posts, branches are public, so you don’t miss out on the openness of the web. And we’ve recently added a feature called “branching” to the product; it’s like Github’s forking meets traditional threading. Last, we know it’s important to be connected to the rest of the web, so we made sure you can grab anything from the web, talk about it with anyone, and publish it anywhere.

We built Branch with you—all of you—in mind. We want it to be a place for you to talk about all the things that are happening in your world. So far, our team has used it to talk about rap music, swap travel ideas, discuss the presidential election, explore a new neighborhood, ask for advice on iOS design, and reminisce about our favorite childhood technologies.