Editor’s Notes: John C. Zolper, Ph.D. is the Vice President of Research and Development at Raytheon, an American corporation with core manufacturing concentrations in weapons and military and commercial electronics. So yeah, neat stuff.

I’ve got a riddle for you. What do Blu-ray disks, military radars and LED light bulbs have in common? Chances are, if you work outside of the defense or electronics sectors, you may not easily make the connection. But the common thread is a little-known technology called Gallium Nitride (GaN for short). GaN is evolving rapidly behind the scenes to transform many aspects of modern day life, while also serving vitally important roles within our nation’s military.

GaN is a wide band gap semiconductor material with special properties that are ideal for applications in optoelectronics, and high-power, high-frequency amplifiers. Aerospace and defense innovators have long recognized the critical competitive advantages GaN represents for high frequency electronics – including significant cost, size, weight and power reduction capabilities – and have spent years refining and continuously pushing GaN technology to new limits. For example, GaN is playing an integral role in developing more reliable military radars that can be five times more powerful than traditional systems or only half the size. In recent years, technologists across a number of commercial industries have taken notice of these pioneering innovations for the military, and have started putting GaN to work to power every day technologies in ways that significantly reduce energy costs and environmental impact.

Take the Blu-ray disc, for example. The next generation DVD is changing the way the world watches movies. Blu-ray discs store video and audio data packets in “pits,” or tiny grooves, which are about half the size of those in traditional DVDs. The tiny, highly accurate Blu-ray laser beam – powered by GaN-based violet laser diodes – can precisely read these hyperfine pits. This enables closer spacing of data packets and up to five times the storage capacity of a traditional DVD (roughly 27 GB of data). GaN technology enables higher resolution for the crystal clear imagery modern movie buffs have come to expect. With support from two of the world’s largest PC manufacturers, HP and Dell, Blu-ray technology is poised as the next-generation optical disc format – with potential to increase PC data storage exponentially in the coming years.

You’ve likely seen the light bulb revolution that’s taking place, but may not have known gallium nitride is at the center of it. As traditional, century-old incandescent bulbs are slowly phased out by federal mandate, LED light bulbs represent the future of the lighting industry. A GaN-powered LED light bulb can easily outlast traditional bulbs by several years, while consuming a tenth of the power and reducing CO2 emissions by 90 percent. The Department of Energy recently commended Philips Lighting for creating a LED bulb that would last more than 20 years – an innovative design with the potential to save Americans a combined $3.9 billion in annual energy costs and reduce U.S. carbon emissions by 20 million metric tons. A number of young companies, including startup Sorra, remain focused on driving innovations in cost-effective LED lighting for the masses.

And LCD televisions, backlit by GaN-powered LED lighting, are thinner, lighter and up to 40 percent more energy-efficient than those using CCFL backlighting. In an effort to reduce the price point for consumers, pioneering companies such as Sony are now introducing the next wave of LED televisions, which will use edge-lit LED as the TV’s light source, reducing the number of LED lights required as compared to first generation LED televisions.

For mobile users, GaN can help ensure an affirmative answer to the old question, “Can you hear me now?” The efficiency and resistance to heat and electronic interference of microwave amplifiers built with GaN enables broader, more reliable cellular coverage, while eliminating the need for power-sucking cooling fans required by older cell phone tower technologies. RFHIC Corp of Suwon, South Korea, which makes GaN-based radio frequency and microwave components for telecommunications and broadcasting industries, estimates U.S. carriers could save approximately $2 billion per year by using GaN technology for their wireless infrastructures. Large carriers, including Sprint, have already launched GaN-powered towers in several markets.

When you think of how much technology is empowered by a tiny microchip, it’s not hard to imagine how GaN will rapidly accelerate innovation across numerous industries in the years ahead. Undoubtedly, future innovators will find new ways to apply GaN technology to our iPads and smartphones, bringing the networked world to consumers’ fingertips more quickly and effortlessly. Companies from start-ups to larger enterprises looking to revolutionize their industries would do well to consider how GaN can drive innovation within their business models. In the meantime, rest assured, innovators, investors and military engineers are already hard at work, staging the next technical revolution. 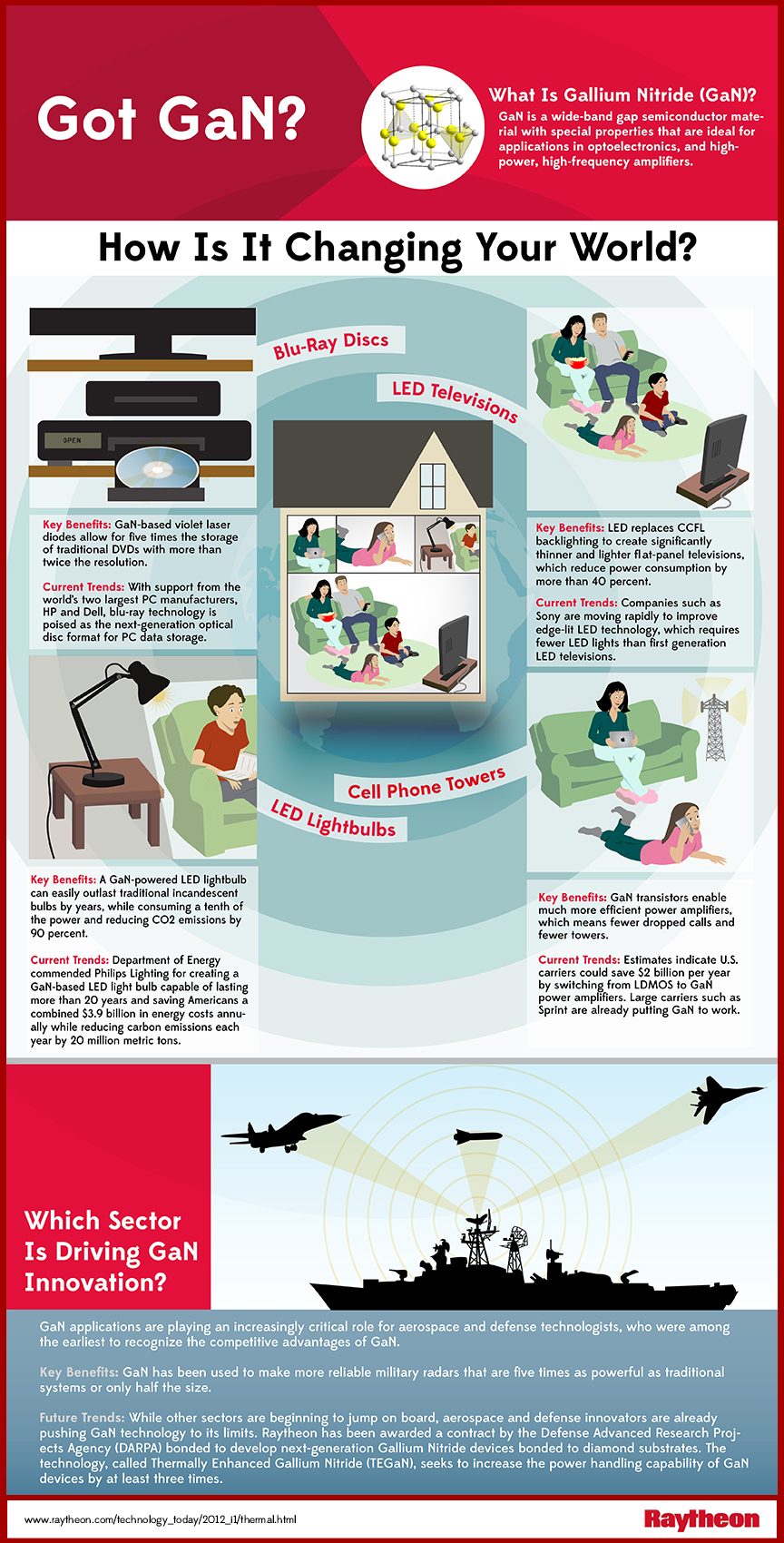