Since The Oatmeal draws comics like 5 Ways To Fight A Crack Whore, the kids down in Mountain View figured they could play a joke on him.

This summer the artist wrote that Google+ comment threads sound like *crickets*, poking fun at the social network’s lack of engagement. He also criticized not being able to “set up a fancy profile URL so I don’t have to link people to http://plus.google.com/blergasdf1234 thimbleturdorgasm99meatpoopypoop xv9donkeypie ” — a made-up, ridiculously long string of random characters.

Yep, you saw a “turd orgasm 99 meat poopy poop” in there. But hell hath no fury like an engineer scorned.

In retaliation, the Google+ team didn’t cite its user growth stats or give an excuse for why there are no custom profile URLs. Oh, no, that wouldn’t be nearly witty enough for the search giant’s brainiacs. 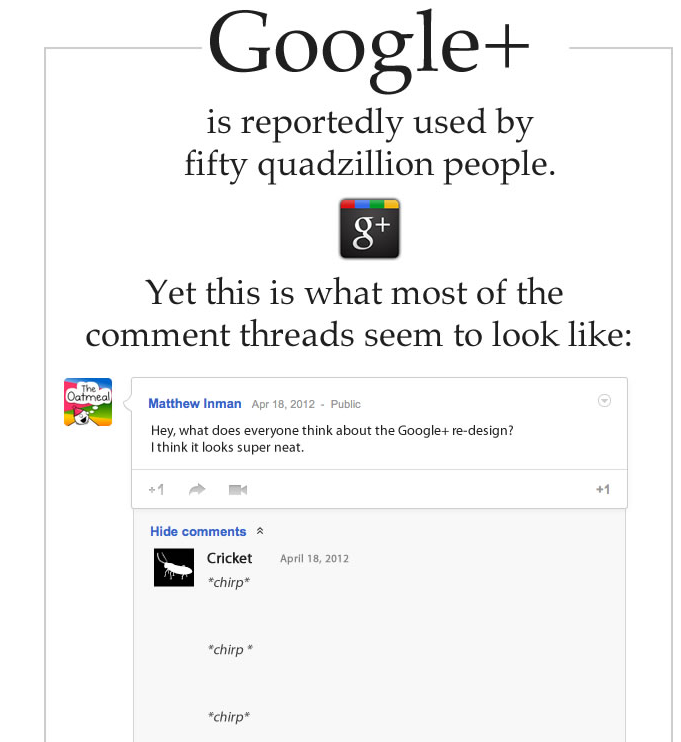 Instead, they just redirected http://plus.google.com/blergasdf1234thimbleturdorgasm99meatpoopypoopxv9donkeypie back to The Oatmeal author Matthew Inman’s Google+ profile “https://plus.google.com/100193529331792590881/posts” . Congrats, Matt, you’ve now got “donkey pie” at the end of your own special Google+ vanity URL.

Maybe his comment threads won’t be such a ghost town now that anyone who types in the joke URL will be able to put the comedian in their Circles.

The best part might be that somewhere in the Google+ code is a little comment to future engineers about the redirect, noting “Don’t take this out, we’re fucking with The Oatmeal.”

Check out TechCrunch’s coverage of how The Oatmeal earned a bunch of money for charity by telling a trademark troll’s mom to go have sex with bears.