In other words, Everyday.me is a mobile and web-based notebook, with bells and whistles, which allows you to record your life and save those updates indefinitely. It’s a bit like Facebook Timeline were it plugged into all of your social networks and were it tailored to be a personal journal in one timeline.

To that point, an even bigger differentiator and likely a point of appeal for many, is that Everyday.me is a private, personal journal. Users can plug in their Facebook, Instagram and Twitter profiles so that each feed is funneled into the app (with Foursquare, Tumblr next up for integration as well as life-logging apps like Nike+ and Fitbit) and can then tag using Twitter-style hashtags to organize and group posts so they’re easier to digest.

If you’re looking to tame your Twitter feed, it’s not a bad way to organize them, especially if you’re looking for that kind of functionality within the framework of a note-taking and journalizer. Everyday.me adds to its own feed, then, with some basic emoticons and integrates with your iPhone’s camera, so you can upload pics directly.

The founders also said that perhaps the most important aspect of Everyday.me is that it’s available everywhere, on the Web, on your phone (although a few mobile platforms would argue it’s not everywhere, at least not natively), offline and via email. The latter is a nifty little feature, taking a page out of Posterous’ book, meaning that users can update Everyday.me directly from their inbox by sending their emails to post@everyday.me. 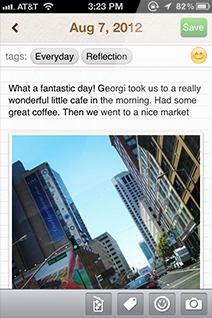 The co-founders have developed a Quarterly Report, which will will offer a deluxe print edition of your timeline (complete with infographics), inspired by the Feltron Report. And, for the nostalgic among us, the app has a “Blast From The Past” feature, which sends you (via email) a social media update on where you were on that day in the past.

Everyday.me is obviously competing with a whole mess of different micro-blogging, journalizing, note-taking and life-logging apps and services, so it has plenty of work ahead. The team will have to nail the user experience to set itself apart from the pack and to help do that, I’d really like to see it be translated to tablets. The team says they’re working on an iPad version, but has no timeline for launch as of yet.