Calling all chefs, wedding planners, stylists, and crafty-types: Pinterest has just opened registration to the public after two years of requiring an invite to join. Anyone can now sign up with Twitter, Facebook, or just an email address. Seems that $100 million cash infusion from Rakuten bought it some operations engineers.

Its growth has already been staggering, so it will be fascinating to see what happens next. Will users flood in faster than ever before? Or will the lack of exclusivity make membership seem less trendy? And yes, if you’re asking, somewhere there’s someone who isn’t on Pinterest yet. And they are unfashionable.

This afternoon, Pinterest announced the end of its beta phase to readers of its adorably named “Oh, How Pinteresting” blog:

“We’re really excited to have the capacity to offer Pinterest to more people and if you’re a Pinner with friends who’ve been waiting on the sidelines, we hope you’ll let them know. Happy pinning to everyone!”

Pinterest hit 10 million unique monthly U.S. visitors back in February, and hasn’t shown signs of stopping. By April, Experian said Pinterest had 107 million visits per month to become the third most visited social media site behind Facebook and Twitter.

As of May, comScore said Pinterest had achieved 4377% year over year growth. That’s a lot of cupcakes and cute dresses. Some early stats also pegged Pinterest as having an overwhelmingly female user base — possibly as high as 97% ladies. 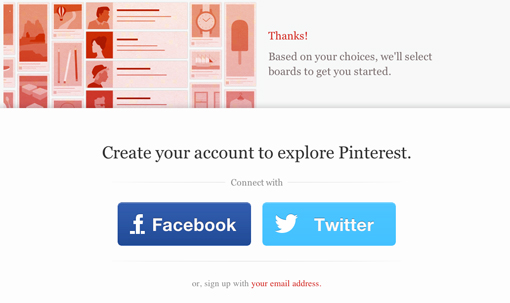 Some thought Facebook would alienate its core user base of college students when it finally opened to the public. Quite the opposite. Accepting everyone jump started growth. The same could be true for Pinterest. Then again, as interior design pin master Anne Sage tweeted, “oh boy, here come the riffraff”.

Keeping itself invitation-only was likely due to engineering constraints. Throwing open the doors too soon could have crashed the site. But after raising $100 million, making tons of hires and moving into a new 60,000 square foot San Francisco office, there’s no need keep growth slow and steady. So tell all your friends they’ve got no excuse not to try it out (mwa ha ha, the first step to Pinaddiction).

Hope the Pinterest engineers have a jug of Sangria handy. They could be in a for a long night.

[Oh my gawd, put the graphic above on your Pinterest]