Many of us right now are wide-eyed with the latest images from NASA’s Curiosity mission to Mars — so much so that, as Europe wakes up from its live-TV Olympics 100-meter sprint slumber, it looks like that site is occasionally crashing from traffic. Now, another, important idea is just starting to take shape: NASA needs money, big time, to keep doing cool stuff like this.

#fundNASA is picking up steam on Twitter with people (at least in theory) saying they would step up to crowdfund NASA for the future.

It turns out that at the moment, it’s cost about $7 per U.S. taxpayer to fund the project, less than 1% of the U.S.’s current military budget. Some are starting to suggest that they would pay a lot more, using a more immediate vehicle like Kickstarter to do it. 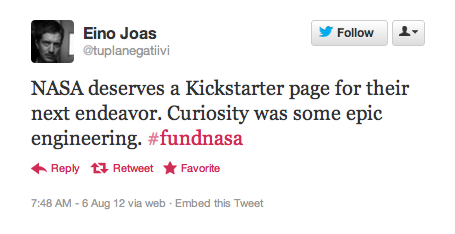 Wonderful coincidence, especially in light of all the Olympic fails, is that it apparently cost over five times as much money to put that show on as it did to get Curiosity on to Mars.

These are all just ideas at this point — not actual projects. But if you think about it, NASA is a perfect candidate for a Kickstarter.

Perhaps one of the most ambitious hardware/software projects to date, but it’s really lost the confidence of its original backers over the last few years as they have moved on to newer technologies and alleged problems to solve (a much argued point).

It’s a great idea, one that we should not see fall by the wayside. Ironically, a search for “NASA” on the site yielded one: a documentary from Jordan Lanham about the future of the space program that picked up $8,590 so that it could be made. 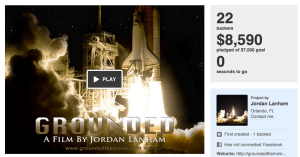 Come on, people, lets give Lanham a reason to delay filming. Someone in the U.S., start #fundNASA, now.

(And why don’t we make it a cross-border project? After all, Kickstarter’s going international soon.)