It was only a few years ago that selling IT to enterprises was the terrain mainly of large companies like IBM, Oracle and Accenture. And in a market that is forecast to be worth some $3.6 trillion this year, they may still be top dogs, but another trend is also afoot: the growth of the enterprise startup.

Growing confidence in the cloud, the falling cost of hosting, the rise of mobile technology and consumerization are all playing their part for smaller companies not only to get their foot in the door with large enterprises but also win lucrative business.

Among all the startups and the VC that specialises in startups that I spoke to for this article, all agreed that enterprise startups are generally getting a much better look in against bigger companies when pitching for business with large corporates.

Alastair Mitchell, CEO and co-founder of enterprise collaboration platform Huddle, puts this change squarely at the feet of consumerization, trends among employees to bring their own devices into work and the rise of apps. Employees are experimenting at home with new services, so the thinking goes, why can’t they do the same at work? As a result: “Disruptive enterprise startups no longer face a credibility gap in the way we used to,” he says.

Alexis Richardson, whose open source-based messaging startup Rabbit Technologies was acquired by VMWare in 2010, says that while that may be the trend among workers, there is a generational change also happening at the higher, decision-making level, which is seeing more risk-taking getting introduced.

“As people get older and drop off the end of the corporate ladder, the younger replacements have a different set of attitudes,” he says. “The CIO of tomorrow will have spent an entire career using modern technology. These CIOs will be more open to buying technology delivered from the cloud, over the web.” But he cautions: “This hasn’t exactly started happening on a wide scale, yet.”

Adam Marcus, MD of OpenView Venture Partners, a VC firm that focuses on enterprise technologies, believes that credibility has come also with a greater, enterprise-wide acceptance of the lower-cost, software-as-a-service model.

“Historically, they would be worried about security and data, but today the SaaS model has actually become more extensive than the traditional on-premise solution,” he says.

Another one of the main reasons why enterprise startups are rising up is because they are moving faster at identifying what enterprises need, and solving that, says Mitchell at Huddle.

“If you can solve a problem that no one else can solve, then you are in. Enterprises will forgive a lot,” he notes. In Huddle’s case, its gap in the market was the fact that enterprises wanted a tool that worked like Microsoft’s SharePoint but also “externally in the ecosystem” — that is, brought in whatever software they used, regardless of whether it was Microsoft’s or not. “We are the only ones that can solve that.”

Of course, Huddle isn’t exactly lean and mean anymore: it has been around for several years, has two HQs (original base in London, and now San Francisco), a pretty extensive list of government and other corporate clients, and has recently raised a $24 million round to extend that even further. (Mitchell also hints of a “huge” deal that they’ll be announcing in about a month.) But there are new, smaller companies coming up on the other end of the scale doing the same thing: 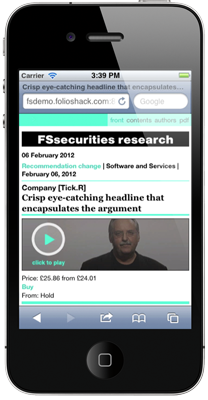 London-based Folioshack has created a publishing platform for investment banks and other verticals to create dynamic presentations for distribution on iPad tablets and smartphones (pictured here). The premise here is that a lot of research today is still “published” using Microsoft Word and Powerpoint, and there is an increasing need to make more user-friendly, dynamic publications for the new wave of wireless devices that bankers and their clients are using, and Word and Powerpoint just aren’t cutting it.

Founder Alex Peretti, who is bootstrapping the company, says he is currently in talks with two major investment banks, plus an accountancy firm and a major advertising and media conglomerate, for pilots of the service. For the big banks and the others, he says, “the question is ‘do we build something like this in house?’ But ninety percent of them just cannot do that. It would take lot of time and money. It doesn’t mean they won’t in the long run but if they can adopt a third-party service right away they will consider that.”

One consequence of the rise of cloud services is the impact on cost. It’s gone down — a lot.

“Amazon and other cloud based systems have become so reliable now you can have databases replicated and scalable for an absolute fraction of the cost you used to pay,” notes Folioshack’s Peretti. He says that you can, these days, get a reliable, cloud-based hosted solution from the likes of Amazon Web Services for between £300 and £400 per month. “Three or four years ago to have that kind of reliability it would have cost £10,000. It would have made a company like mine impossible to get off the ground.”

Marcus says that cost advantage plays directly into the hand of lean startups, which are built to make do with small teams of people. “The ability for these software companies to build these products in a cost-effecive manner have driven down pricing significantly lower than 5-7 years ago,” he says. One of OpenView’s portfolio companies, Kareo, which focuses on medical billing software, has essentially replaced a box that could have cost “a couple of thousand dollars” per month when adding in the cost of a person to manage it at the customer’s premises. Kareo’s web-based service is $135/month. And half of its new customers find it through search engines and sign up online, “without ever talking to a salesperson.”

The lean, cloud-based approach may mean that smaller companies can get off the ground, but some believe it doesn’t really translate to a cost advantage. “Maybe services cloud have made things cheaper, but when you think about it, that’s made it easier for everybody,” says Richardson.

Minimum viable product, less minimum than for a consumer startup

Richardson doesn’t stop his caution there. He still says that, despite the more open, and perhaps more level playing field, creating a successful enterprise startup is still “very hard indeed.”

“When I meet companies today that want to do enterprise software, I think ‘What are you thinking?’”

Peretti agrees that even with advances, “Enterprise is still harder to get in to for a startup. The minimum viable product is still there, and it has to be bigger and better than you would have in consumer startups.” Part of the reason is because products are not free, and you cannot simply say you are testing in beta as you would for a consumer — although there are a growing number of services, like Box and Hootsuite, that do work free models into their wider business plans, so that might be a trend to watch ahead.

There has also been plenty of VC money flowing into enterprise. In July Andreessen Horowittz led a $100 million investment into developer code and collaboration site GitHub as well as an $11.2 million investment in javascript framework company Meteor. And Huddle itself recently raised $24 million. OpenView in March announced a $200 million fund that Marcus said would be focused specifically on startups focused on big data and cloud services.

Marcus at OpenView believes that this is part of a wider trend. “My guess is that you may see VC’s spend a lot more time in B2B than they have been,” he says. “Just as a few years ago the pendulum swung to consumer, and my guess is that you might see it swing to the enterprise side now.”

Because many of them are seeing recurring revenue from a very early stage of life, the trajectory of an enterprise startup is potentially longer than that for a consumer startup.

“Products tend to have higher longetivity once an enterprise standardizes on a service. Ultimately it can be a more sustainable business model if you get it right,” notes Mitchell at Huddle. “Consumers can be binary and there is a lot of luck in that, but if you solve a good enterprise problem you can build a great business, and change the way that people work.”

But on the other hand, the most successful of them potentially might meet a different fate. That of getting, as Mitchell puts it, “taken out” by a much larger competitor. Among the bigger deals are Yammer getting bought by Microsoft and a spate of acquisitions at Oracle and Salesforce. The latter of these, Marcus notes, has been particularly agressive.

“Every time any startup gets momentum in the industry that is adjacent to what Salesforce does, it goes and buys it,” notes Marcus, citing Buddy Media as just one of the most recent, high profile examples.