Arda Kara and Alexander Blessing are from two pretty different places — Turkey and Germany, respectively — but as students pursuing master’s degrees in computer science at Stanford, they both faced very similar problems when it came to communicating with their family and old friends.

Because of the massive time zone differences between California and Europe, it was pretty much impossible to schedule a time to talk daily on the phone or via Skype. Texts and emails were a bit too cold. Video messages through mobile apps such asSocialCam and Viddy were just a bit too high-maintenance — who wants to have to shave before sending a quick “Hi” to mom and dad?

So they teamed up to build VoiceGem, a simple app for the web and the iPhone that lets you send and receive personal voice messages. VoiceGem, which is part of the current Summer 2012 class at Silicon Valley startup incubator Y Combinator, is launching in public beta today.

Some of the most key things about VoiceGem are negatives, things it *doesn’t* require from users: It doesn’t cost any money. It doesn’t require special software. It doesn’t have you send or open any kind of attachment. It doesn’t require a special international calling plan or card — or even a phone number at all. It doesn’t need a high-quality microphone system. The initial use case was for communicating with family of all ages, Kara and Blessing tell me, so the aim was to make it as simple as possible. 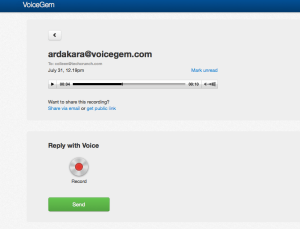 It works like this: VoiceGem senders sign up for the service using either an email address or Facebook account. They then type in their intended recipient’s email address, click the record button, and start talking (messages can be as long or short as they want.)

The recipient then gets a message with a link that directs to VoiceGem’s website, where he or she can listen to the recording. The recipient can also reply to the VoiceGem message on the same thread, without signing up for an account.

A simple idea that could take off

VoiceGem’s founders don’t have any revenue generation plans at the moment, though they say that the app can be useful to businesses who want to communicate simple messages to their customers. This kind of use case could lead to a business model at some point, they acknowledged, but for now the focus is just on building the product out.

In all, I think it’s a nifty service that could come in handy for a lot of people, not just people with family and friends scattered around the world. There is something nice about sending a quick greeting with the human element of your voice, without interrupting someone’s day by making his or her phone ring. Yes, it’s a small and simple product, but it comes from a smart place — and those types of things have been known to catch on pretty well before.