MindSnacks, the DreamIt Ventures accelerator grad that has become known for its addictive educational games for iOS (that feature an ever-present slug), announced today that it has raised $6.5 million from Sequoia Capital.

Back in 2010, Jesse Pickard, Jeff Evans, Andy Mroczkowski and Karl Stenerud initially founded MindSnacks as a way to help their friends and fellow gamers turn their Angry Birds and Fruit Ninja addictions into something with a little bit more long-term value. Frustrated with the lack of options in language learning, they launched an educational app that used the addictive mechanics of mobile gaming to teach people those fundamental vocabulary, reading, writing and comprehension skills in their language of choice.

Their portfolio of language-specific apps has since grown to 14, including Spanish, Mandarin, and even SAT vocabulary. The goal behind the apps was simple: Turn the typical study and material retention process for students, which involves rote memorization, boring flash cards and textbook glaring, into an activity that people would actually enjoy. Crazy, right? Well, it was just so crazy that MindSnacks’ portfolio of games has today attracted over four million downloads, which is significant for an educational app.

And now, with its new capital in tow, the startup plans to go bigger, expanding beyond language acquisition and test preparation into subjects the average high school and college student would find in their curriculum. To do so, the startup will be using its new cash to ramp up hiring, especially around engineering and design, adding to their current stable of animators, educational experts, and designers, which develop MindSnacks games in-house. 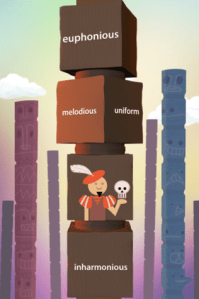 Of course, when it comes to funding, this isn’t MindSnacks’ first rodeo. The startup raised $1.2 million back in March of last year from a roster of notable angels and VCs, including Felicis Ventures, 500 Startups, Mitch Kapor, Collaborative Fund, StartupAngel, Maneesh Arora, DreamIt Ventures, Startl, Theoria Capital and David Kim — to name a few. Pickard tells us that, since then, the startup raised a small, $800K bridge round, allowing previous investors to re-up. With its series A in the bank, MindSnacks has raised its total funding to $8.5 million.

Sequoia Partner Bryan Schreier, who led the firm’s investment, said that the big appeal for him had been in the startup’s potential to actually make learning fun — not just for kids, but for people of all ages. With MindSnacks having attracted four million downloads, and a near 50/50 split between those over 18-years-of-age and those under, its games have already shown some glimmers of promise.

Plus, Pickard tells us that each of the company’s six foreign language apps (Spanish, French, Italian, German, Mandarin and Portugese) are the number one grossing app for each language in their respective App Store categories. In terms of real value, the co-founder says that users are today learning over three words per second, with nearly 70 million words having been learned up to date — and is also finding some loyalty among users, with 32 percent of users having downloaded more than one app.

Why? Pickard attributes it to maintaining an empathetic psychology in regard to one’s users, or dumbed down, that it believes learning should — and can be — fun. While that sounds warm and fuzzy, MindSnacks believes that it differentiates itself from traditional instructional software by designing engaging games (with slugs, mind you) that drive long-term retention and better performance. That’s obviously the key.

While gamification is busy ravaging the educational system, not all instructors are eager to see mobile phones and tablets show up in their classrooms. But Pickard says that MindSnacks isn’t necessarily meant to be used in-class or as a replacement for traditional learning tools, but instead to supplement schoolwork after hours, providing some fun, extra tutelage at home.

Although Pickard stresses that MindSnacks doesn’t only apply to in classroom contexts, he does see a lot of potential application in continuing education. He tells us that, in interview last year, he quipped that MindSnacks was a fun tool for “everyone from age five to age sixty-five,” which came back to haunt him, as the startup’s inbox was soon brimming with angry emails from seventy-year olds who wanted to make sure MindSnacks knew that they were patrons, too. 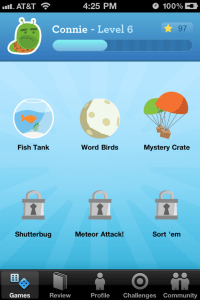 In fact, TechCrunch’s own Jordan Crook is currently using MindSnacks to learn Mandarin and says that hopes for a bilingual future are now more realistic. She’s actually taken to greeting me on Skype in a different language each day.

At present, the startup’s apps span 50 thematic lessons, with each app featuring 6 mini-games built around particular language processing or comprehension skills, for example, which (combined with an adaptive curricular algorithm) are designed to help you learn vocab concepts, grammar and context fast.

Yet, as mentioned above, going forward the team is looking to expand its repertoire beyond languages, with forthcoming titles covering Geography, Math and more. In looking forward, Pickard sketches possibile futures for MindSnacks in the context of the explosion of health tracking devices, like the Nike+ FuelBand, for example, which are changing the way that people interact with their health data, putting users’ cholesterol, heart rate and fitness progress all in a simple, web-based dashboard. In other words, these incredible, sensitive mobile tracking devices are turning bio data into something more actionable and structured, and the co-founder believes the same is happening to education.

So, as the company is gathering reams of data on how people learn, what words they get stuck on, and the types of grammar skills they breeze through, Pickard sees MindSnacks eventually being able to make that information far more digestible, showing you what areas of language acquisition you struggle with and offer exercises geared towards filling those gaps, for example. In short, help users to optimize their education. And that, my friends, is worth 6.5 million golden slugs.

For more, check out MindSnacks at home here.