Pinterest has been growing fast and furiously, and as a result, many retailers have been rushing to add “Pin It” buttons to their social sharing options. A few months back, flash sales giant Gilt City got some buzz for becoming one of the first to incentivize “pinning,” allowing users to unlock special deals on Gilt by re-pinning certain items. In other words, after a product was pinned, say, 50 times, the pin would link to a hidden sale on Gilt where users could purchase that special, discounted item.

Gilt’s clever move was further evidence that retailers are starting to understand the inherent value of Pinterest as a marketing platform. Seeing a growing demand among brands for better ways to incentivize their users to socially engage with their products (especially via Pinterest), Splurgy is today releasing a tool that allows brands to do just that.

Splurgy, the makers of a self-service platform that allows brands to reward their customers’ social media engagement, is now looking to enable true Pinterest commerce integration by giving brands the ability to reward users for pinning their products — a la Gilt.

The San Francisco-based startup considers itself a “universal promotions platform,” through which marketing teams can conceive and execute on giveaways, flash sales and social coupons that can be synced across their Facebook, Twitter and Pinterest accounts, and even embedded in their websites.

Splurgy is on a mission to give brands some granularity in terms of how they offer promotions and coupons via social networks — and to whom. For example, marketers are keen to find ways to reward their faithful users and top influencers, so Splurgy allows them to create VIP coupons, in which they reward users based on settings they choose. In 60 characters or less, brands can describe the benefit of the coupon to the users (say an additional 15 percent discount) if they qualify based on certain criteria, which might be having at least 300 followers on Twitter, for example. 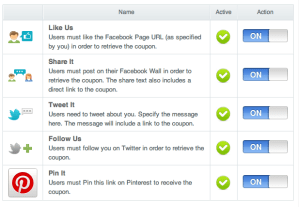 The startup also offers brands the ability to collect and store user data, including their name and email address, and for users of their enterprise plan, demographic information as well. On top of that, Splurgy optimizes coupons and promotions for mobile, including free support for Android and iOS. Brands also have the ability to set up coupons and promotions so that users have to complete multiple actions, across multiple social channels, to receive the reward. So, for example, users would activate that 50 percent discount on a new tablet if they “like” the product’s URL on Facebook, tweet the product and pin it on Pinterest.

Up until now, Splurgy has offered support for Facebook, Twitter and Google+, but today they’re officially stepping up their Pinterest efforts, now enabling brands to offer their users the ability to enter sweepstakes, download coupons and qualify for discounts by way of the Almighty Pin.

But how has Splurgy worked thus far? Co-founders Michi Kono and Brian Kim tell us that IGN has been using Splurgy over the last two months to promote their events, including IPL4. In aggregate, Splurgy generated 6,104 Facebook Likes and 2,697 Facebook shares, while generating 4,163 Twitter Follows and 4,679 tweets. Meanwhile, the co-founders say that Roboform has used Splurgy to acquire 406 new social media followers at a cost of 24.6 cents each over the course of the campaign, which took place over two days.

And to put that in context, Splurgy charges a flat monthly rate (which starts at $30/month) and fluctuates based on the value of the item brands are giving away. In other words, Kono says, pricing is based on features-accessed, rather than on the number of fans a brand has or the traffic they attract.

Michelle Goodliff, the head of social media marketing at Siber Systems and Roboform, said that, prior to using Splurgy, the team hadn’t used a third-party service, but decided to use it because Splurgy doesn’t require users to authorize and application to participate in the offers, unlike many Facebook apps of its ilk. She also said that, for a recent giveaway, they saw a 900 percent increase in followers per day.

In terms of competition, there have long been a number of big-name companies in this space, but recently we’ve seen that number dwindle as Buddy Media and Wildfire have been scooped up by Salesforce and Google, respectively. After Wildfire’s exit yesterday (and in relation to Goodliff’s comment), the co-founders said that they believe that the Facebook Page ecosystem is on the way out, and that they’ve been intentionally investing efforts in their new Pinterest integration as well as website embedding.

“We think the next big thing is off-Facebook solutions,” Kono said.

Of course, as a company that is offering Promotions-as-a-Service without reling on Facebook apps, he would say that. But the idea of bringing Facebook functionality to websites and other social media certainly holds water, and the more the company can beef up its analytics and assure brands that it’s incentivizing long-term engagement, while continuing to offer promotions optimized for mobile, the more room it will find to grow.

For Techcrunch readers interested in trying out the service, the co-founders are offering a code which can be redeemed for a 40 percent discount on all plans for the first 2 months. The promo code is: TC40. 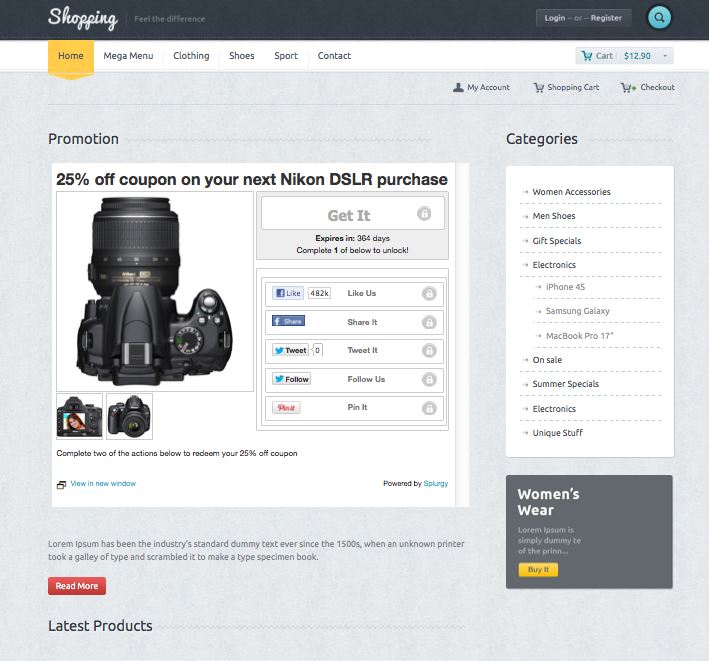